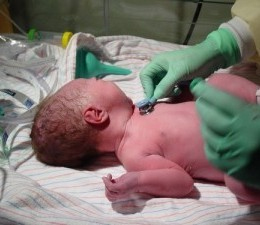 A preliminary research conducted at John Hopkins University has revealed that newborns who are exposed to chemicals that are used to make nonstick cookware, firefighting foam, paper products and other items weigh slightly less and have slightly smaller skulls.

According to Dr. Lynn Goldman, a pediatrician and professor at the university’s Bloomberg School of Public Health, the study of 300 babies found “very small decreases” in birth weight and head circumference. The babies were born at John Hopkins Hospital in Baltimore between 2004 and early 2005. The mothers ranged in age from 14 to 43.

The study is the first to suggest a relationship between the compounds and health.

“We would want to see it replicated by others before we make a big to-do about it,” Goldman said.

The reason the weight and the head circumference were measured was because both are the biological factors that can signify changes in growth.

The study looked at the amount of perfluorinated chemicals in the infants. While numerous compounds were found, higher levels of ammonium perfluorooctaonate, also known as PFOA or C8, and perfluorooctane sulphonate anion, or PFOS, were discovered.

The two compounds “seem to be highly correlated,” Goldman said.

Goldman presented the preliminary findings last week to a workshop sponsored by the U.S. Environmental Protection Agency and DuPont Co.

The EPA has pushed for the phase out of PFOA and PFOS in the manufacture of various products. DuPont uses PFOA to produce Teflon. DuPont does not use PFOS, which is used in a variety of products from fabric coatings to paper products.

DuPont has long retained that PFOA is not harmful to human health.

“Many chemicals were detected in the study’s samples,” said Dr. Robert Rickard, DuPont’s science director, “and it is important to note that the observations from the study were very small and well within normal ranges.”

The preliminary findings have not changed DuPont’s view on PFOA, he said.

A study conducted by the University of Minnesota found no effects on birth weight of babies born to women exposed to PFOA and PFOS at their jobs, Rickard said.

There was no association between the age of the mother and the compounds found in the infant, she said. The information also didn’t show a connection to premature births.

Since the women lived in the Baltimore area, the dilemma for researchers is to determine how they were exposed to PFOA and PFOS, Goldman said.

DuPont has funded several studies looking at PFOA and its effects on its workers.

To settle a class-action lawsuit filed by West Virginia and Ohio residents, DuPont agreed to fund a separate health screening of up to 70,000 residents. The residents sued the company alleging that the chemical had contaminated their public and private water supplies.