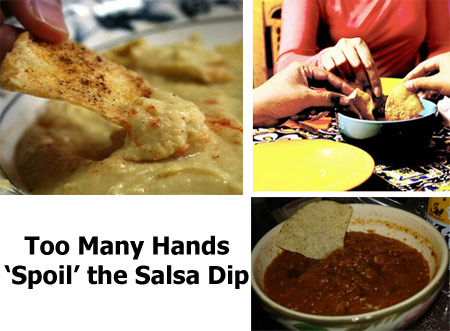 It seems that Jerry Seinfeld may have been right when he concluded that ‘double dipping’ is just plain gross in a Seinfeld episode that’s become very famous. In case you have no idea what double dipping is all about, you may want to read further. That is only if you are one of those who are those who are careful about what you put in your mouth. Still confused? Read on.

Double dipping refers to the process of dipping a half-bitten chip back into the dip (sauce, salsa), or perhaps even reaching out to a bowl of peanuts at a bar. Think about it! A minimum of ten people could have possibly reached out for peanuts from that very bowl, transferring their mouth microbes onto the remaining peanuts or chips. The case becomes more evident where chip-and-dip is concerned.

A research, perhaps inspired by Seinfeld himself, was conducted by food science students at Clemson University in Clemson. It found that for every time a bitten cracker went back into the bowl, hundreds, and probably even thousands of bacterial cells went with it.

According to Paul Dawson, the food sciences professor who oversaw the project, “In the real world, if you have dip out there, you’re probably going to have more than one person dipping into that dip bowl. It could be a big party. You have lots of people dipping. So, every time someone dips, they’re inoculating that many cells into the dip.”

The research was conducted under Clemson’s creative inquiry program, which teaches undergraduates how to conduct research while encouraging out-of-the-box thinking. Teams made up of students at various points in an undergraduate degree set out to explore interesting ideas, often producing scientific journal-worthy results in the process.

It seems that the Seinfeld character ‘Timmy’ may have been right when he was outwardly repulsed at the sight of George Costanza double-dipping a chip into a Petri dish. For your entertainment, here’s a recap of that episode.

“Did you just double-dip that chip? You double-dipped the chip. That’s like putting your whole mouth right in the dip!” said the disgusted Timmy.

“That’s not too far off. I like to say it’s like kissing everybody at the party- if you’re double dipping, you’re putting some of your bacteria in that dip,” concluded Dawson.

Well, now that does seem plain old gross! So, you may want to think twice before reaching out for the chip-and-dip bowl or salsa!