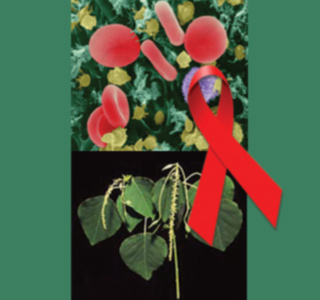 Stanford has found a new way to chemically produce two compounds which are present in plants and can activate and bring out dormant HIV from the host’s T cells. And thus in this way the virus is susceptible to attack by the antiretroviral medicines.

HIV often moves back into the host’s T cells to getaway from the effects of antiretroviral “cocktails”, and for almost 10 years dormant HIV lies there awaiting for a chance to burst forth in a fresh round of infection. HIV hunts for a good bird dog.

Stanford chemist Paul Wender says, “The virus may be flushed out in the open to make it the target of the immune system and antiretroviral therapies with the help of synthetic prostratin, found in the Mamala plant (Homalanthus nutans) that grows in the Samoan rainforest, and DPP, a molecular relative of prostratin found in resin spurge (Euphorbia resinifera) that grows in arid regions.”

Paul Wender added, “We’re not sure how far this will go, but certainly, from a theoretical point of view, it has promise of taking therapy to the next level-that is, addressing issues related to eradication of the disease, of the virus, at least.”

In the study published in the Journal Science it has been found out by researchers that both compounds were acting as activators of dormant HIV in previous studies.

There were obstructions in the research as the two compounds were difficult to attain and were mainly required in quantities for laboratory purpose to work on their own mode of action and therapeutic potential, said Wender.

He also added that there are chances of damaging ecology which is preventing scientists from cutting the wild plants which provides the two compounds.

This new idea by his team has developed synthetic prostratin and DPP which can be prepared in the lab.

“We have now minimized, if not eliminated, the issue of availability of prostratin and DPP. But equally, if not more importantly, we have opened access to other compounds that might be similar in structure but superior in function,” said Wender, the Francis W. Bergstrom Professor.

So now scientist would be able to get the basic compounds and play with the structure and related function of synthetic prostratin and DPP.

Will brain be able to see after vision is restored after...