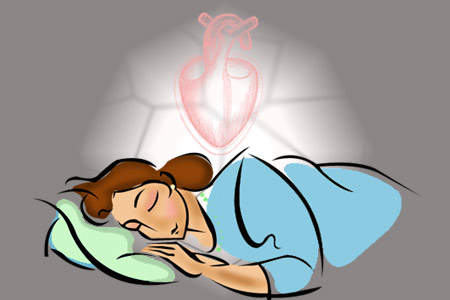 Lack of sleep could be more fatal to women than men. Experts have stated that women who sleep for less than eight hours at night may have more chances to experience heart-related problems in comparison to men with similar sleeping styles. They are believed to have found that levels of inflammatory signs could differ considerably with sleep duration in women, in contrast to men. The experts were from the University of Warwick and University College London.

It was observed that women who slept for eight hours in contrast to those who slept for nearly seven hours may have lower levels of Interleukin-6 (IL-6). Supposedly, IL-6 was an indicator associated to heart disease. Women who slept for less than five hours seem to have high levels of High-sensitivity C-reactive protein (hs-CRP). Hs-CRP appears to be the second indicator for death due to cardiovascular disease.

For the purpose of the study, experts were believed to have gathered nearly 4,600 members from London-based University College Whitehall II group study. Approximately, 73% of the members were male and were between the age group 35 to 55 years. They were noted to have been employed from 20 London-based civil service departments between the year 1985 and 1988. The findings of this study were from the phase 3 report from the year 1991-1993. Lack of sleep was observed with the help of individual questionnaires whereas general health was evaluated at the time of screening test.

“Further prospective studies are required to ascertain causality but the results also are consistent with the idea that sleeping seven or eight hours per night appears to be optimal for health,” explained Dr Miller.

Dr Miller has stated that her study may give some insight into a possible method in support of the observations made in the previous studies. Apparently, the previous studies have signified an increased risk of death from cardiovascular disease in individuals who have less than five hours of sleep every night and increased possibility of non-cardiovascular death in individuals who have more than eight hours of sleep.

Evidently, this was a major study which may have linked measures of inflammation with duration of sleep in both men and women.

This study has been published in the American journal SLEEP.