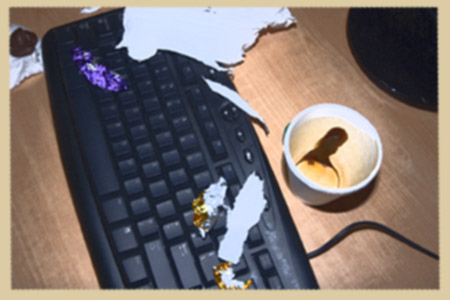 Ever thought of dusting your favorite electronic system – the Computer – as this very computer keyboard which proves to be a boon to all PC users, is actually filled of more harmful bacteria than what even a toilet seat has.

Tests held in London offices found that the bugs present around the computer and the keyboards could literally cause food poisoning. From the 33 keyboards selected, four keyboards had the possible health danger and one harbored five times more germs when compared to one of the office’s toilet seats. Microbiologist Dr Peter Wilson said that a keyboard was often “a reflection of what is in your nose and in your gut.”

The research found that the keyboards were so dirty that it had 150 times the actual limit for bacteria – five times as grubby as a lavatory seat tested at the same time. The system had bugs like E.coli and staphylococcus aureus which could cause food poisoning.

According to the health experts there are various reasons for the formation of bugs as the employees fail to keep their desks clean and do not follow a hygienic routine like washing hands before lunch and after visiting the bathroom or toilet. The prime reason for the development of bacteria is that people eat their lunch near the computer desk. This would cause diseases like diarrhoea and sicknesses like food poisoning and stomach disorders.

Moreover it was found that half of the workers (almost 46%) didn’t clean their keyboards and work-areas on a daily basis, out of the 4,000 office workers who were interrogated.

James Francis, the microbiologist who led the investigation, said, “Two keyboards he examined under a microscope contained levels of bacteria so high they had to be removed from the office”.

He also said, “One carried more bacteria than the average toilet seat and that he had rarely come across anything as filthy in his 22-year career.”

Francis, of Kingmoor Technical Services, said “That keyboard was increasing the risk of its user becoming ill.”

The study held which was held for the consumer guide Which Computing? has mentioned the most common types of bacteria:

Well on this note we should all keep our surroundings and especially the computer systems and keyboards clean and neat, and remove all the crumbs present in between the keys and other areas. To live a health and prosperous life, hygiene should be the prominent factor.