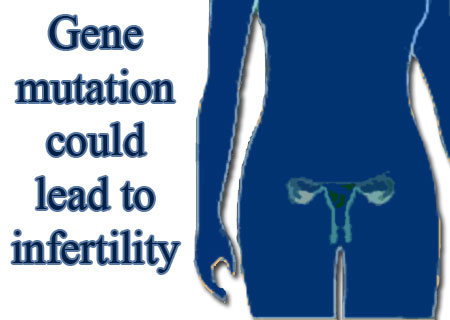 A latest research has unveiled a novel genetic cause for a condition which may lead to potential infertility in women. This condition of primary ovarian insufficiency, takes place when a loss of normal functioning of ovaries has taken place before 40 years of age.

Primary ovarian insufficiency or premature ovarian failure is believed to be a very commonly affecting condition, affecting one in every hundred women on an average. The cause of this condition is not clear yet, but in certain cases it may be caused due to autoimmune diseases. Researchers believe this condition has certain genetic causes, because evidence of this condition has occasionally been found to take place within families. However, till date only rare genetic mutations have been detected, which can be credited for a minority of these cases.

Dr. Ken McElreavey, and Dr. Anu Bashamboo from the Institut Pasteur in Paris, who led the present research have identified the NR5A1 gene mutation, which is believed to be linked with premature ovarian failure.

These researchers, in their analysis on mice have stated that the NR5A1 gene controls the genes that are essential for the development of sex organs. This gene regulates the function of the follicle in females, and the development of testes in males. NR5A1 gene is also credited for the regulation of the estrogen production in women and testosterone production in men.

The researchers assessed four families having a history of ovarian deficiencies in the females and sex development disorders in the males. Other than this, 25 women also suffering from ovarian insufficiency were analyzed for the purpose of the research. The researchers discovered a change in the NR5A1 gene in all the families, and in few of the separately selected women. However, similar changes were not found in control group of more than 700 people who were not suffering from either ovarian deficiency or sex development disorder. The researchers also state that it is not mandatory for women with this particular gene mutation to develop the condition of ovarian deficiency.

These researchers believe that their findings may be useful for developing a diagnostic test, mainly for women having a family history of premature ovarian failure.

This research was supported by the Agence Nationale de la Recherche-GIS Institut des Maladies Rares, the March of Dimes Foundation, the National Institute for Health Research Biomedical Research Centre and the Wellcome Trust.

Their findings are published in the New England Journal of Medicine.