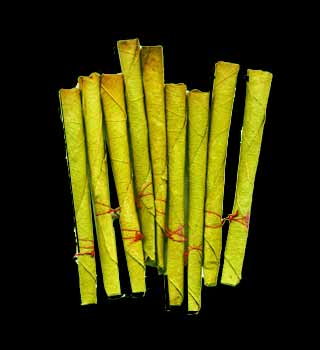 Beedi or ‘bidi’ is the cheap and Asian version of cigarette in which tobacco is hand-rolled in the ‘tendu’ leaf. It is more harmful than cigarette smoking as it contains more tar, nicotine, carbon monoxide, carcinogenic hydrocarbons and other toxic and class A carcinogenic substances like nitrosamines (NNN & NNK), but surprisingly less tobacco than a cigarette.

A study was sponsored by the Indian Union Ministry of Health, co-produced by World Health Organisation, Healis-Sekhsaria Institute for Public Health, Centers for Disease Control and Prevention and US Department of Health and Human Services under the leadership of Prakash C Gupta and Samira Asma.

It has been found that around 2,00,000 tuberculosis deaths and a total of 6,00,000 belong to the beedi smoking population.

“In India, beedi smoking contributes substantially to death from tuberculosis,” said Health Secretary Naresh Dayal. “Beedi is the most widely used form of tobacco. There are 240 million tobacco users of which 100 million smoke beedi,” he added. Beedi smoking causes lung cancer, oral cancer, heart diseases, lung disease and addiction. “We have more bidi smokers than any other tobacco product,” said Prakash Gupta, director of the Healis Sekhsaria Institute of Public Health, Mumbai, one of the co-editors of the report.

The study titled ‘Beedi and Public Health’ also notes that 800 billion beedis are smoked in India annually, an enormous figure in comparison with 100 billion cigarettes. It has also been noted that most of the beedi smokers belong to the rural areas in India where the smoking habit is found highest in Muslim males and second highest in Hindu males. The habit is seen to take place in the children as young as 8-10 year old.

India has 2,90,000 beedi growers in India and more than 4.4 million beedi workers. More than 85% of world’s beedi tobacco production takes place in India in states like West Bengal, Andhra Pradesh, Tamil Nadu and Karnataka where cheap labour is available. Beedi from India is also exported to US, which come in various flavors like cherry, mango, honey, strawberry, chocolate and others. Around 14 brands comprising of both filtered and unfiltered are exported to US out of which 5 are labeled as herbal beedis.

“To impose a ban or any restriction on the bidi sector is not under the mandate of the health ministry. Our job is to generate awareness. We can suggest a logo on bidis signifying the dangers of its consumption. Now the matter is subjudiced and we can think of it only after the court order,” says Dayal.

However a ban on beedi will pose serious problem of unemployment among rural population which is worrying the Indian government. Hence an alternative job source is being identified by the government.