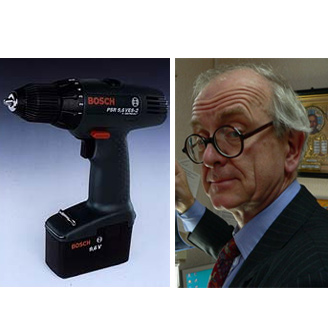 One of Britain’s leading brain surgeons has used a Bosch backyard drill to successfully remove a brain tumor from a fully conscious patient. Sounds like a scene from one of those psycho horror movies doesn’t it! Before, you think that with the success of this surgery, just about anyone and everyone may be able to perform brain surgeries, read on. There is a reason to him using this $65 cordless drill.

Dr.Henry Marsh was visiting Ukraine to help people who were let down by the region’s vastly inadequate health system.

He was performing an operation on a woman Marian Dolishny’s head, when suddenly the power ran out. Dr. Marsh realized he had to complete the operation in order to save the woman’s life and thus had to resort to using the cordless drill.

“I’m not recommending that we should all use bosh do-it-yourself drills in England, but it shows how with improvisation you can achieve a lot,” he later said.

Moreover, the woman being operated upon was only given a local anesthetic because he could not find a fully trained anesthetist. However, he said that this gave him the benefit of being able to talk to his patient, to ensure that he was not inflicting any sort of brain damage.

This unusual procedure was also captured on film. It will be aired on March 30, on BBC and is called The English Surgeon.

It is important to note that Dr.Marsh’s patient would have to face death had her tumor not been removed.