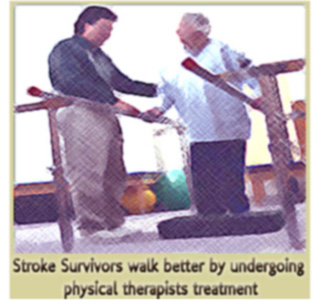 According to a study reported by Journal of the American Heart Association, it has been discovered that walking therapy for stroke survivors proves to be more effective. The study was conducted by a physical therapist rather than a robot. The research has recommended that for a patient who is suffering from neurological damage caused from stroke or spinal cord injury, moving the legs in a way which imitates walking on a treadmill would facilitate walking recovery.

The stroke patients are very weak to walk alone without any support so physical therapists often harness them on a treadmill and aid them to move just as though they are walking. But this would be a difficult task on a daily basis for a physical therapist to do, thus robotic devices are an alternative to relive the therapist.

A few of the researches have shown that the robotic devices are likely to improve the walking ability, however some of the recent animal studies have pointed that giving vigilant training can reduce the recovery achieved.

“We wanted to know whether using a robotic device that guides the limb in a symmetrical walking pattern would facilitate greater improvements in walking speed and symmetry than more traditional walking interventions with a physical therapist,” said T. George Hornby, Ph.D., M.P.T., the study’s lead author.

Hornby and colleagues have examined 48 stroke survivors with a past record who had suffered stokes at least six months back and yet had a moderate to severe trouble walking as they were still suffering through the weakness on the side of their bodies. The patients were divided into 2 categories of robotic-assisted locomotor training and traditional physical therapist-assisted locomotor therapy. Now the patients who were under the locomotor training were fitted with a harness and balanced from the frame over the treadmill. There were 12 therapy sessions received by the patients which was of 30 each minutes for a period of four to five weeks of the study.

“We found that stroke patients improved their walking whether they had the robotic device or the therapist helping them,” said Hornby, an assistant professor in the physical therapy department at the University of Illinois in Chicago. “However, the amount of improvement was greater in the therapist-assisted group.”

“When learning to walk again, if people can make mistakes and realize their errors and change their behavior based on those errors, they may learn better,” Hornby said. “We also think that patients work harder and therefore improve more with therapists because the robotic device moved patients’ legs for them throughout the therapy. Therapists only help as needed.”

Researchers have suggested that the effectiveness of the robotic devices would benefit the acute stroke patients who are unable to walk on their own, and those who are able to at least walk independently although at a slow speed should be aided by human-assisted therapy.

The research has been funded by The National Institute of Disability and Rehabilitation Research and the Department of Education.