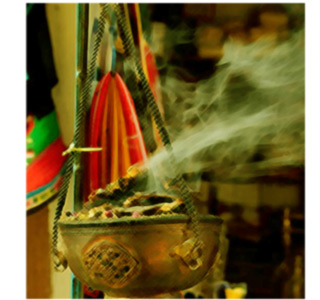 We have been hearing from religious leaders since ages that burning smell of incense is supposed to be good for the soul. But now it has been proved practically too by some of the biologists that such burning incenses are good for our brains aswell.

Some of the international scientists’ team which included researchers from Johns Hopkins University and the Hebrew University in Jerusalem, have explained as to how the burning frankincense which is the resin from the Boswellia plant generates the ion channels in the brain to ease anxiety or depression. They also commented that slowly a new type of drug would be prepared for depression and anxiety from it.

“In spite of information stemming from ancient texts, constituents of Bosweilla had not been investigated for psychoactivity,” said Raphael Mechoulam, one of the research study’s co-authors. “We found that incensole acetate, a Boswellia resin constituent, when tested in mice lowers anxiety and causes antidepressive-like behavior. Apparently, most present day worshipers assume that incense burning has only a symbolic meaning.”

To know incense’s psychoactive effects, the researchers have been tracking incensole acetate to mice. It was revealed that the compound primarily affected some locations in the brain which actually contain the emotions and also the nerve circuits which get affected by current anxiety and depression drugs. Particularly incensole acetate generates a protein called TRPV3, which is seen in mammalian brains. When the mice breed without TRPV3 protein it gets open to incensole acetate, which is a compound and has had no changes and effects on their brains.

“Perhaps Marx wasn’t too wrong when he called religion the opium of the people: morphine comes from poppies, cannabinoids from marijuana, and LSD from mushrooms; each of these has been used in one or another religious ceremony.” said Gerald Weissmann, M.D., Editor-in-Chief of The FASEB Journal.

“Studies of how those psychoactive drugs work have helped us understand modern neurobiology. The discovery of how incensole acetate, purified from frankincense, works on specific targets in the brain should also help us understand diseases of the nervous system. This study also provides a biological explanation for millennia-old spiritual practices that have persisted across time, distance, culture, language, and religion–burning incense really does make you feel warm and tingly all over!”