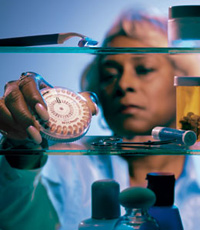 The Estonian Postmenopausal Hormone Therapy trial (EPHT) was funded by the Academy of Finland, and led by Research Professor Elina Hemminki from the National Research and Development Centre for Welfare and Health (Stakes).

During the course of trial, the researchers noticed that there were no differences in general quality of life between the group of women receiving hormones and the comparison group. Benefits were reported by only those women who experienced hot flashes, and nighttime sweating.

The trial examined the effects of hormone therapy on utilisation of health care services, onset of illnesses, and well-being. In 1999-2001, 1,823 postmenopausal women aged 50 to 64 were recruited in the Tallinn and Tartu regions. All of them took the research medication for two-five years.

The researchers chose Estonia for the study because hormone therapy is already established in Finland, and physicians have a very positive attitude towards its use.

They noticed that hormone therapy led to an increased number visits to health care centres, and increased treatment costs. In comparison to the control group, lower abdominal ultrasounds, and electrocardiograms were performed on the group receiving hormone therapy, but there were no differences in the number of gynaecological or breast surgeries, bone density measurement or mammography.

It was noticed that women receiving hormone therapy showed slightly more cardiovascular disease, cerebral circulatory disease, and cancer in comparison to those who did not take hormones.

The recipients of hormone therapy had less fractures, hot flashes and night-time sweating than the comparison group, but they also had more flow.

There were no differences however in depression, sleep disorders, fatigue, dizziness or bloating.