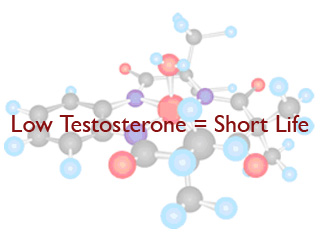 Discovery of having low testosterone can depress a man for life; however, it comes with more trouble than expected. Researchers at Ernst-Moritz- Arndt University of Greifswald, Institute for Community Medicine, Germany has linked testosterone deficiency to increase in long-term risk of death.

The study has described the deficiency to be the reason behind increased death risk from all cause i.e. “all-cause mortality.” Through this study, the researchers therefore warn the men with unhealthy lifestyle to put their life on the right track.

It is advised that men facing the problem of low sex hormone, irrespective of their age, should control their weight, exercise regularly and follow and have a healthy diet before it is too late. As Robin Haring, a PhD student and the lead author of the study puts it, “It is very possible that lifestyle determines levels of testosterone.”

Haring and his team studied as many as 2,000 men belonging to the age-group of 20 – 79 living in northeast Germany. These men were participants in the Study of Health in Pomerania (SHIP). The follow-up study averaged 7 years.

Initially, 5 percent of the 2000 men showed low levels of blood testosterone. The testosterone levels could be accounted as the ‘lower end of the normal range’ for young adult men. Haring notes that the men having deficiency were older, more obese, and had a greater prevalence of diabetes and high blood pressure, in comparison to the men with higher level of the sex hormone. In comparison with the men having high testosterone, the testosterone deficient men had more than 2.5 times high risk of dying in the subsequent 10 years, according to the study.

The difference in the longevity of life in both cases of high and low levels of testosterone, was not explained by factors like age, intake of smoking and alcohol, level of physical activity, or increased waist circumference (a risk factor for diabetes and heart disease notes Haring.

However, in cause-specific death analyses, the deficiency was expected to be the reason behind diseases like cardiovascular disease and cancer and also the reason behind deaths occurring from these diseases; meanwhile no other cause of death was determined.

The detailed study will be presented at The Endocrine Society’s 90th Annual Meeting in San Francisco.