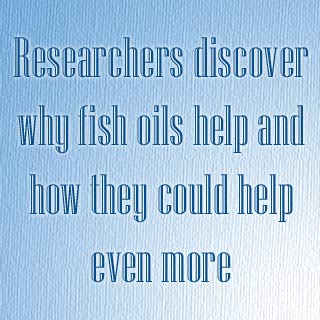 This is an interesting piece of news. According to a latest research from Queen Mary, University of London and Harvard Medical School, health benefits of fish oil could possibly lead to novel treatments for life-threatening conditions such as sepsis and stroke. The researchers discovered that the body converts a fatty acid in fish oils into a powerful anti-inflammatory biochemical called Resolvin D2. Supposedly, this chemical is accounted for the ability of fish oil to treat conditions such as rheumatoid arthritis.

The research suggests that Resolvin D2 could possibly provide the basis of new treatments for a range of serious diseases which involve inflammation. Apparently, the list includes sepsis, stroke and arthritis. Sepsis is known to be a disease where a potentially deadly reaction to infection causes inflammation to rage through the body. Unlike other anti-inflammatory drugs, this chemical does not seem to suppress the immune system.

For the purpose of better understanding this criterion, researchers were noted to have examined a particular ingredient of fish oils called DHA. The findings revealed that the body appears to convert DHA into Resolvin D2 showing the chemical’s structure.

Lead researcher, Mauro Perretti, Professor of Immunopharmacology at Queen Mary, University of London said that, “We have known for some time that fish oils can help with conditions like arthritis which are linked to inflammation. What we’ve shown here is how the body processes a particular ingredient of fish oils into Resolvin D2.

“We’ve also looked in detail at this chemical, determining at least some of the ways it relieves inflammation. It seems to be a very powerful chemical and a small amount can have a large effect,” he continues.

Perretti further elucidated that, “This research is important because it explains at least one way in which fish oils can help in different types of arthritis. We can also work on this chemical and see if it can be used not only to treat or even prevent arthritis, but also as a possible treatment for a variety of other diseases associated with inflammation.”

Inflammation is known to be caused when the body’s natural defences against infections are mistakenly directed at healthy tissue. Additionally, it seems to play a crucial role in many health problems ranging from heart disease and stroke to arthritis and cancer. Previous research has shown that a vital step in the inflammatory process appears to occur when white blood cells, called leukocytes, stick to the inner lining of the blood vessels, called the endothelium.

The findings of the research have been published in the journal, Nature.