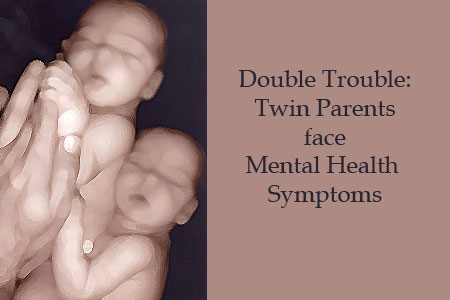 Conceiving twins may be a blessing to only a few limited amount of the population, but if you thought they were all so cute and adorable, think again! Apart from the addition to the responsibilities, a new study cites that those lucky ones who have become proud parents of the twins suffer from mental health symptoms after delivery and one year later as compared to that of the single baby delivery.

Twins may be one of the rarest and only the luckiest ones get the opportunity of delivering two babies at one go. Parents of twin babies are known to go through the dilemma of sharing responsibilities amongst themselves and also the double babies demand a lot of attention which is very difficult to manage.

Mothers who give birth to twins due to assisted reproductive technology (ART) are known to have had lesser levels of symptoms of depression before the birth as compared to mothers of twins conceived spontaneously. Whereas the fathers of the twins in both ART and spontaneous twin births were prone to more depression, anxiety, social dysfunction and sleeping problems in comparison to fathers of single babies.

Dr Leila Unkila Kallio, a senior consultant in gynaecology and obstetrics at Helsinki University Central Hospital, Helsinki (Finland), explained as to how mothers who go through ART and are less prone to depression “This may be due to better counseling and preparation of infertile couples for twins. The good mental health during pregnancy may also reflect the couples’ satisfaction with successful treatment and fulfillment of hopes for parenthood”.

So the study concludes as to how twins invite double trouble and double the responsibilities teamed with an addition of mental health issues for the parents. The study has been presented at the 24th annual meeting of the European Society of Human Reproduction and Embryology in Barcelona.