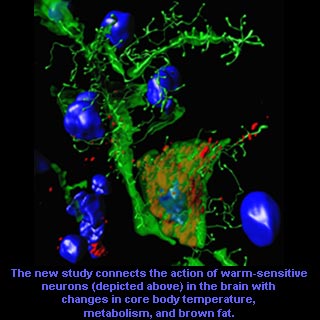 Scientists from The Scripps Research Institute are believed to have discovered a direct link between insulin and core body temperature. Insulin is known to be a hormone long associated with metabolism and metabolic disorders such as diabetes. Though much study has been performed on insulin since its discovery in the 1920s, this is the first time the hormone appears to have been connected to the basic process of temperature regulation.

The study found that when insulin was injected directly into a specific area of the brain in rodents, the core body temperature seems to have raised, metabolism increased and brown adipose i.e. fat tissue was stimulated to release heat. In addition, these effects appear to have been dose-dependent up to a point. For instance, the more insulin, the more these metabolic measures apparently rose.

“Scientists have known for many years that insulin is involved in glucose regulation in tissues outside the brain. The connection to temperature regulation in the brain is new,” said Scripps Research neurobiologist Manuel Sanchez-Alavez, who was first author of the new study, now at the University of California, San Diego.

Besides suggesting a new perspective on diseases such as diabetes that engage the disruption of insulin pathways, the study seems to add to our understanding of core body temperature. Core body temperature refers to the temperature of those parts of the body containing essential organs, namely the trunk and the head.

Usually, core body temperature may perhaps be staying within a narrow range so that key enzymatic reactions can take place. When core body temperature goes outside this range for extended periods i.e. higher as in fever, or lower as in hypothermia, it could possibly harm the body. More modest variations in core body temperature are known to be associated with the daily 24-hour sleep-wake cycle, the female monthly hormonal cycle and interestingly, the effects of severe calorie restriction.

Co-author of the study, Olivia Osborn said that, “Our paper highlights the possibility that differences in core temperature may play a role in obesity and may represent a therapeutic area in future drug design.”

Scientists were noted to have been examining the biology of temperature regulation for about a decade. The idea for the latest study seems to have come about from some recent experiments in Tamas Bartfai’s lab while exploring the properties of cells called ‘warm-sensitive neurons.’ These cells could perhaps exist only in the preoptic area of the brain, which is known to regulate core body temperature.

The authors appear to have characterized these neurons and their transcriptome and noticed something unexpected i.e. a messenger RNA for an insulin receptor. Also, transcriptome refers to all of the messenger RNA molecules in a cell, which reflect the genes being expressed.

“We were surprised to find the insulin receptor. The insulin receptor is very well documented in the pancreas and in other peripheral tissues. But in the brain, it was not clear and we definitely did not know about its existence in warm-sensitive neurons,” says co-author of the study, Iustin V. Tabarean.

Assuming that insulin was acting in the regulation of core body temperature because of its presence in warm-sensitive neurons, the scientists appear to have set out to investigate. In order to do so, they may have made use of an atypical combination of techniques including molecular biology at the single-cell level, electrophysiology, imaging techniques, and in vivo metabolic studies.

Initially, Tabarean seem to have led the single-cell work by analyzing the effect of insulin on individual warm-sensitive neurons, which shoot more often when temperature rises. The findings showed that insulin could be potent in reducing the neurons’ firing rate. Subsequently, the authors designed numerous whole animal studies to confirm these findings and examine the pathways in the body that might be affected.

They supposed that insulin in the brain may perhaps function to warm the body via a specific pathway. This pathway apparently involves signals that traveled from the brain’s preoptic area, down the spinal cord, to neurons that direct brown adipose tissue to use energy to produce heat.

Brown adipose tissue, also known as brown fat could be distinctive from white fat in that it burns calories instead of storing them. In earlier years, brown fat was considered to live in humans only when they were infants. However, latest studies have shown that brown fat deposits could also be found in healthy adults, particularly around their collarbones and necks. Amusingly, older people appear to have less brown fat than younger people. Also, obese individuals seem to have less brown fat as compared to lean individuals.

In order to notice if brown fat was activated by insulin in the brain, the authors collaborated with members of Seimens Medical Solutions, who are experts in imaging techniques. Specifically, they examined the effect of insulin injections in the preoptic area of rats on brown adipose tissue via Computerized tomography (CT) scans and positron emission tomography (PET) scans.

They found that rodents appear to possess brown adipose tissue in two large masses on their backs between the shoulder blades. When the activity of the brown fat was captured visually, the data confirmed the scientists’ projections.

“All the techniques—PET/CT scan, metabolic studies, telemetric work—support the hyperthermic effect of insulin in rodent models,” he summarizes.

Later, Sanchez-Alavez examined the effects of insulin on metabolism. Supposedly, this examination was specifically done by measuring the effect of insulin injections in the preoptic area of mice on oxygen consumption and carbon dioxide production. Once more, they found that the metabolic rate seems to have increased with a raise in insulin.

The findings of the study have been published online in the journal, Diabetes.