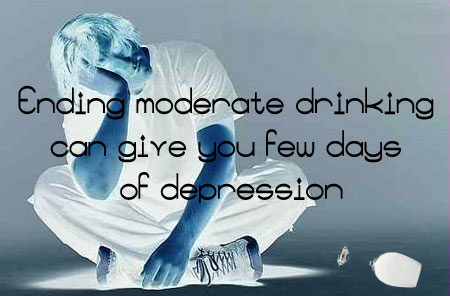 While alcohol addiction can ruin lives, moderate drinking can really help us keeping away heart disease, certain types of stroke and some forms of cancer. However, according to a new study, if we try ending the moderate drinking, it can make us feel all blue!

Stopping moderate drinking may take off the protective shield from us and lead to problems like depression and reduced neurogenesis. Neurogenesis is the process of brain to produce new neurons. The research that reveals the new finding has been conducted by Bowles Center for Alcohol Studies at the University of North Carolina at Chapel Hill.

“Our research in an animal model establishes a causal link between abstinence from alcohol drinking and depression,” said study senior author Clyde W. Hodge, Ph.D., professor of psychiatry and pharmacology in the UNC School of Medicine. “In mice that voluntarily drank alcohol for 28 days, depression-like behavior was evident 14 days after termination of alcohol drinking. This suggests that people who stop drinking may experience negative mood states days or weeks after the alcohol has cleared their systems.”

Now if you are wondering, how is depression in mice determined? Well, the researchers got their answers by making the mice swim! Known as the Porsolt Swim Test, the mice made to swim in a beaker filled with water, for six minutes. Since mice are known to be good swimmers and can swim their way to glory without any hassles, the time the rodents were immobile out of the six minutes, was calculated to be the time they were depressed (index of despair or depression-like behaviour). The more the duration mice remained floating or not swimming, the more depressed they are.

“This research provides the first evidence that long-term abstinence from moderate alcohol drinking – rather than drinking per se – leads to a negative mood state, depression,” Hodge said.

Now, the second finding of reduced neurogenesis came to light after the depression was linked to a major decline in the neural stem cells, the cells that mature into neurons. Also, a reduction in the number of new neurons hippocampus (a region in the brain) was noted.

Hippocampus holds a lot of importance for process like normal learning and memory and recent studies have prove it to be responsible for regulating mood too, said Hodge. Hence, low neurons in hippocampus led to negative effect in mice and these findings can be implied in humans as well, according to researchers.

However, those who drink moderately for health benefits need not worry if they are planning to quit. The study also revealed that the depression can be cured by taking antidepressants for 14 days after which the production of new cells would also start in the normal fashion.