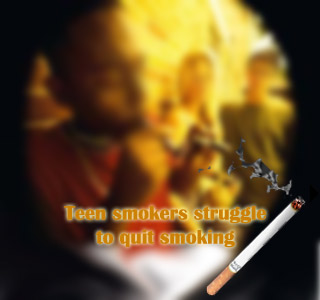 A recent study conducted by researchers from the University of Montreal reveals that an exceptionally large number of teenagers try hard to get rid of the smoke stick, but only fail in doing so, resulting in an increase in cravings. With a report every three months for five years from 319 Montreal teenagers, analysis of the data showed that their incapability in giving up smoking made them low on confidence.

Dr Jennifer O”Loughlin, lead author of the study commented ,” The study found that teen smokers make their first serious attempt to quit after only two and a half months of smoking, and by the time they have smoked for 21 months they have lost confidence in their ability to quit. These findings indicate that teenagers want to quit smoking. We really need to develop and implement effective tobacco control interventions for young people, before it’s too late”.

“These findings show that teen smokers want to quit and attempt to quit, but very few are actually able to stop for long periods. This research suggests that much more needs to be done to prompt teenagers to quit in terms of programming, legislation and taxation. In particular, federal and provincial governments must get the contraband situation under control – cheap cigarettes discourage teen smokers from quitting.” said Rob Cunningham, senior policy analyst, Canadian Cancer Society, which funded the study.

The research stated that in the initial stages teenagers make an earnest attempt to quit smoking, however it’s often too late and they are hooked to cigarettes by then. This further shatters their confidence to kick the butt. Fifteen percent of teens either smoke daily or occasionally according to the 2006 Canadian Tobacco Use Monitoring Survey by Statistics Canada. The Montreal study revealed that in nine months teenagers become monthly smokers, in 19 months they become weekly smokers and it takes 23 months for them to become daily smokers. By the end of the five year study only 19 percent of teenagers actually managed to stop smoking for 12 months or more, with the desire to quit expressed by more than 70 percent of them. An increase in the number of girls attempting and quitting smoking was seen in comparison to boys.

If policy makers refocus their attention on quitting tactics rather than prevention strategies, many teen smokers will benefit, as they go through various stages to quit smoking. The study is published in the American Journal of Public Health.