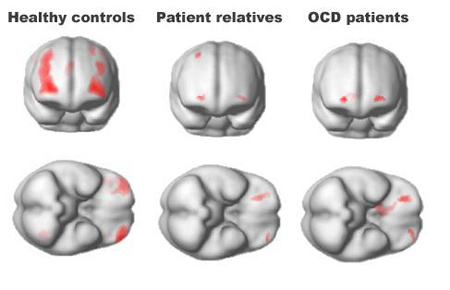 With the help of a latest discovery, the diagnosis of obsessive compulsive disorder (OCD) may become speedier and more objective. Researchers at the University of Cambridge have found that detecting and measuring brain activity can help identify the risk of developing the disorder in people.

OCD is detected by clinical interview and traits of progression witnessed in the one suspected to be afflicted by it.

It has been estimated that atleast 2-3 percent of the masses suffer from OCD in some point of their life.

OCD is characterised by hard to suppress reappearing thoughts, known as obsession, and repetitive rituals, known as compulsions, that occur to avoid or ‘neutralise’ these recurring thoughts. While the obsessions can be described by the example of constant fear like contamination, the compulsion can be explained by the act of washing hands every time. This disorder disrupts the quality of life and work.

The culprits behind the disorders have been determined to be genetics running in families.

The latest method used by Dr. Samuel Chamberlain from University of Cambridge’s Department of Psychiatry was functional magnetic resonance imaging (fMRI) that measured the brain’s activity happening in the frontal lobes consisting of the lateral orbitofrontal cortex (OFC) (as seen in the image via Science Daily).

The fMRI helped in detecting the activity in brain of volunteers who were studied upon.

Dr Chamberlain, who led the study, explains, “Impaired function in brain areas controlling flexible behaviour probably predisposes people to developing the compulsive rigid symptoms that are characteristic of OCD. This study shows that these brain changes run in families and represent a candidate vulnerability factor. The current diagnosis of OCD is subjective and improved understanding of the underlying causes of OCD could lead to more accurate diagnosis and improved clinical treatments.

However, much work is still needed to identify the genes contributing to abnormal brain function in those at risk of OCD. We also need to investigate not only vulnerability factors, but also protective factors that account for why many people at genetic risk of the condition never go on to develop the symptoms.”

Therefore, the genes working along with the brain to produce the disorder have been determined to be the reason behind OCD.