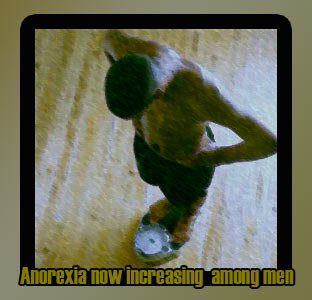 If you think men suffer from just a single type of ED, think again. As unbelievable as it may sound, young men are dangerously affected by a more serious ED-an eating disorder which they find even harder to discuss. Anorexia nervosa, a term associated with loss of appetite commonly called as anorexia is more frequent among teenage girls. The serious disorder however, is widely spreading among young men in search of a perfect body.

A report in the Daily Mail has revealed the results of a recent survey in Britain based on data provided by the British government. The survey suggests that the past five years has seen a rapid increase in the number of men undergoing treatment for anorexia with the figures going up by 67 %. Experts say that there could be more to this, though official figures show that 1,700 men or 32 % have received treatment for this lifestyle disease in the past year.

Susan Ringwood, the chief executive of eating disorder charity Beat, remarked, “The rise in male anorexia actually masked a much bigger problem because men traditionally are less likely to seek help. There has been a rise in focus on the body aesthetic and that’s affecting men as well as girls. Clinics are seeing many more men, as well as children as young as eight. We know children are more likely to develop an eating disorder during puberty, and puberty is starting on average five years earlier than it did 50 years ago.”

Frances Connan, Consultant psychiatrist and lead clinician for the Vincent Square eating-disorder clinic divulged that anorexia could pose a more serious threat to men as they find it doubly humiliating to seek for help. Looking at anorexia as a “girl’s problem”, men are reluctant to come forward with the eating disorder.

Anorexia cases in Durham have shot up abruptly with a 360 % increase whereas in South East London and Yorkshire anorexia has risen by 246 % and 139% respectively. The survey further found that from 202 children in 2001-02 to 255 children in the past year, there was a 26 % increase in the number of children less than 14 years of age being treated at hospitals.