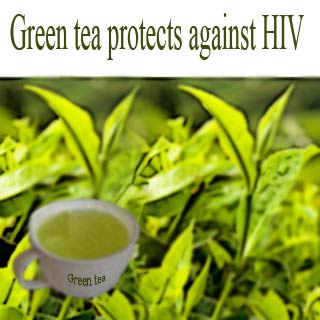 According to a breakthrough study, a particular green tea component can inhibit the AIDS virus, HIV-1, from infecting the immune system cells. This study was conducted by the researchers of the Baylor College of Medicine and Texas Children’s Hospital.

Earlier studies had revealed that a green tea component, the epigallocatechin gallate (EGCG), prevents the HIV-1 from grasping to the gp120 cellular entry molecule, which in turns prevents this virus from infecting the immune system cells.

Dr. Christina Nance, assistant professor of pediatrics, Baylor College Medicine, says that, “Now we have shown that EGCG can inhibit infection not only in a specific strain of HIV-1 but in multiple subtypes and strains. This is paramount from a global aspect. Most initial studies with HIV-1 in the Americas are based on subtype B.”

Nance continues that in their earlier conducted studies they had demonstrated the process in which it works, on the other hand, the present study provides concrete evidence about the same. They support their claim with definitive proof revealing that the green tea compound does in fact prevent HIV infection in lymphocytes or T-cells.

The investigators took samples of the immune cells from the blood of people not suffering from HIV/AIDS, and introduced these immune cells to the virus in the laboratory. Later, when these infected cells were incubated with the EGCG, it was discovered that this particular compound prevented the virus from infecting other cells.

The study investigators state that, “Thus, EGCG may represent a potential low-cost inhibitor of global HIV-1 infection that could be used at least as adjunctive anti-HIV therapy.”

It is stated that the earlier drugs proved inefficient in curbing the virus entry into cells because the virus mutated. Nance hopes that this green tea component would be successful in preventing such mutations. It is stated that at present Nance is conducting various tests with the aim of evaluating the probability of EGCG to generate such resistant mutations.

This breakthrough study could aid in the development of various treatments against this disease. They hope to soon conduct a study of this compound in people.

This study was funded by the National Institutes of Health and the Baylor Center for AIDS Research.

Their findings are published in the Journal of Allergy and Clinical Immunology issue.