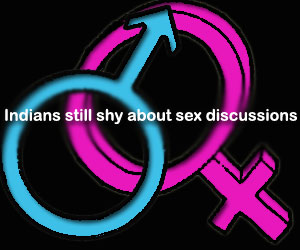 Well it doesn’t surprise us that Indians are still bashful about the S-word. A new survey reveals that discussions on sex are still a major concern for Indian couples. The country’s men rank sex seventh in the list of priorities while the women fare worse with sex fourteenth in their list of important tasks. Shy and how we must say!

For both men and women family life was of utmost important and other life priorities included being a spouse, work or career, being a parent, financial well-being and physical health.

Rupin Shah, andrologist at Mumbai’s Lilavati hospital, commented, “In India, the survey showed that adults who are less than satisfied with sex are less likely to be satisfied with life overall. There is also a clear link between satisfaction with erection hardness and satisfaction with sex for people in India. I ask our physicians to reach out to their patients and help them realize that sexual health is as important as any other aspect of their overall health and wellness. Taboos about the subject should be set aside to ensure the health needs of men and women in the Asia Pacific are well met.”

An intriguing discovery of the survey was that nearly one out of two men in India did not have an optimal erection hardness and more than 60% of women felt their partner’ s erections were inadequate. The distinct study involved nearly 2,016 sexually-active men and 1,941 women from the general public aged between 25 and 74 years.

Other key findings of the survey were that overall a greatly satisfied sex life is significantly linked to a great life. Greater satisfaction with sex for both men and women meant greater satisfaction with erection hardness. Erection hardness was also found to be strongly related to satisfied sex, love, romance, family life, and role as spouse/partner. A lower positive attitude about life in general was found in men with suboptimal erections. They also had sex less often and were quite unhappy about their bedroom activities.

Additionally men it appeared found sex more important as against women. An important part of sexual activity was orgasm for men while women gave much greater importance to physical foreplay.

The main aim of the survey was to collect as much information on the attitudes of people in the Asia Pacific region towards sexual health. Characterized by diverse cultural beliefs, the study looks at encouraging people to seek help for issues regarding sexual health in these regions.