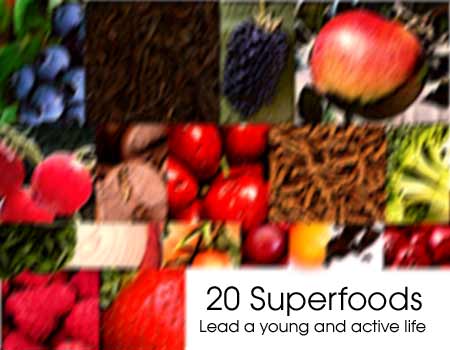 Who doesn’t want to stay young? If someone tells you they don’t care about their age, we’re darn sure you won’t believe them. Even kids these days who’ve just learnt about the birds and bees get all worked up about their appearance. So in case you are one of those people whose wrinkles give them sleepless nights, here’s some great news.

Professor Gary Williamson, professor of Functional Food department at Leeds University, reveals 20 functional foods that should be consumed for a long and active lifestyle. You may not be surprised though that most of these foods are fruits and vegetables. According to researcher these foods should be a part of our diet, if we want to slow down the aging process and also be disease-free.

“These foods have been chosen because they are highest in polyphenols, which reduce the risk of heart disease and help to slow down ageing processes. A low intake of fruit and vegetables increases the risk of chronic disease, whereas the foods on this list maximise one’s chances of reaching your potential lifespan, which is why I call them lifespan-essential”, mentioned Professor Williamson.

While describing these foods as lifespan-essential, the researcher further asserts that the chemicals polyphenols are produced by plants and are known for their antioxidant properties which in turn help avert cancer and heart diseases. Even though most of foods are rich in nutrients and fibre, it is the polyphenols in these foods that interests Professor Williamson the most. He suggest that it is these polyphenols that generally guard people against diseases and enhances your life span by protecting cells from the natural damage over the years.

So if you are looking forward to stay young while you actually mellow, here’s a list of some of the foods who should include in your diet. The key functional foods include apples, blackberries, black tea, blueberries, broccoli, cereal bran, cherries, cherry tomatoes, coffee, cranberries, dark chocolate, oranges, peaches, plums, raspberries, red onions, spinach, and strawberries. We think the list is really interesting. Haven’t you noticed yet? There’s dark chocolate, coffee, berries and much more!

The researcher however points out that these foods may solely serve the purpose of keeping you active and young while you age. It may not really prevent you from dying prematurely as premature death is determined by our genes. Also the research has been gladly received by the British Heart Foundation, though they have apprehensions about the inclusion of chocolate.

Considering this list of twenty superfoods may in fact make for a great menu, we think there’s no harm in trying.