Diseases caused as a direct result of a mosquito bite are known as vector borne diseases and popularly called as Mosquito borne diseases. Mosquitoes act as vector agents carrying these diseases. The list of ailments caused by mosquitoes includes yellow fever, malaria, Filaria, viral encephalitis and dengue fever. An estimated 700 million people annually in the Americas, Africa and most of Asia are affected by these diseases, with a whopping million resulting in deaths and other infections. We’ve discussed the most important among these below. 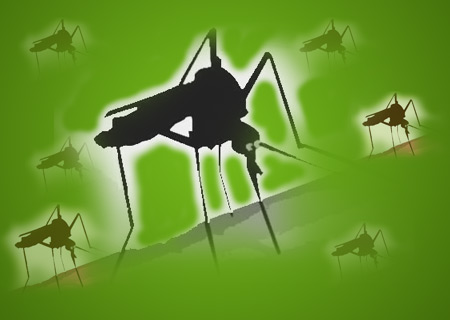 ‘Malaria’ means ‘bad air’. For ages, inhalation of swamp vapors was thought to be the cause of this disease. However today malaria is known to be transmitted by a bite of the female Anopheline mosquito. Swampy and humid regions are breeding grounds for these mosquitoes.

When one is bitten by an infected mosquito, ‘sporozoites’ of Plasmodium are injected into the wound. These sporozoites are infective and move via the bloodstream to reach the liver. Here they form cyst-like units which release thousands of ‘merozoites’ on maturity. Each released merozoite enters and resides in a red blood cell and thrives on the enclosed hemoglobin. The ruptured RBC then releases the merozoites along with the cell debris and malaria pigment (haeme), which keep on attacking newer RBCs till phagocytosed by cells of our immune system. Thus, the infected patient acts like a reservoir of Plasmodium and causes newer mosquitoes to get infected every time they bite. The Plasmodia species in the liver may persist chronically for many years causing repeated attacks of malaria and spreading it to more and more people by infecting mosquitoes.

The signs and symptoms of Malaria include severe chills, headache, fever, myalgia disguised with intermittent periods of well being. P. falciparum is the most severe and life-threatening form of malaria that exists.

The best treatment for Malaria is Oral chloroquine. Symptoms tend to decrease within 24 hours after such therapy begins, and the patient normally takes 3 to 4 days to recover completely. P. falciparum is resistant to chloroquine. Hence it must be treated with oral quinine along with pyrimethamine and a sulfonamide.

Dengue is a viral disease that gets transmitted between humans when an infected mosquito bites. The virus is picked up by the mosquito when it bites an infected person. The dengue virus is then carried and deposited into the blood stream of a healthy person when it bites. The Aedes Aegypti species of mosquitoes is responsible for its spread. It takes 5 or 6 days normally for the disease to develop once bitten. Dengue is seen in 2 forms, namely- Dengue Haemorrhagic Fever (DHF) and Dengue Fever. DHF is more severe of the too often leading to death.

There is no cure or vaccine to prevent it. Most people recover from routine dengue fever in about two weeks to one month time by getting plenty of rest, increasing fluid intake and taking acetaminophen (paracetamol) for fever and body aches. Aspirin or medications that contain aspirin should be avoided since these medications increase the risk for severe bleeding and hemorrhage. Hospitalization becomes mandatory for people who show symptoms of dengue hemorrhagic fever and dengue shock syndrome only.

It means ‘that which bends up’ in an African language. It’s a viral disease that is transmitted by Aedes mosquitoes. This disease is characterized by rashes, fever and severe arthritis. Chikungunya basically has 5 symptoms. These are fever, arthralgia, headache, rash and backache. As of now there aren’t any specific treatments or vaccines available for Chikungunya. The illness is usually self-limiting and gets resolved with passing time. However administration of Paracetamol and getting plenty of rest may prove to be beneficial in recovering quickly.

Aedes mosquito bites are responsible for the spread of this viral disease. The symptoms of this disease start appearing normally after 3-6 days of bite by an infected mosquito. Yellow fever has 3 stages:

Early stage – Fever, Headache, muscle pain, joint aches, flushing, loss of appetite, vomiting, and jaundice. On an average after 3-4 days, the symptoms go away briefly. This period is called period of remission.

Period of remission – Most individuals recover in this stage itself. However if they don’t, they move on to the next stage.

Period of intoxication – This is the most dangerous stage. Once the patient reaches this he/she runs the risk of vital organs dysfunction. Organs such as heart, liver, kidney or brain might get involved. These dysfunctions include delirium, seizures, coma, shock, and death.

No specific treatments are available for yellow fever. Treatment for symptoms can include dialysis for kidney failure, blood products for severe bleeding, intravenous fluids etc.

Other diseases that are vector borne or are spread through mosquito bites are filariasis, Rift valley fever, Japanese encephalitis, etc. Historically, before mosquito transmitted diseases were brought under control; they caused tens of thousands of deaths and thousands of infections. These diseases are still rampant and lead to deaths all over the world. Controlling them is the need of the hour.

Mentioned below are the various steps that can be taken to control these diseases.

However we all should acknowledge the fact that eradicating all the mosquitoes in the world will never happen, realistically speaking. Therefore, taking appropriate measures against mosquitoes is the next best solution to have a healthy society. What we should never forget is that we all are collectively responsible and hence must work together to fight and control the spread of these mosquito borne diseases.