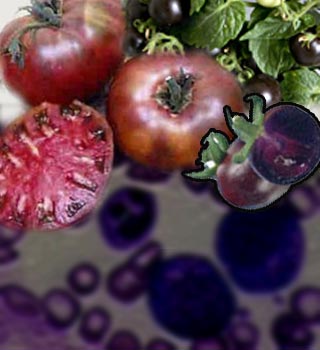 Many foods these days are emerging victorious in their qualification as super foods. Well we don’t mean food that’s just super taste wise but we mean food that’s super by combating certain serious ailments. The latest food to make its presence felt in this category is purple tomato. Yes tomato that’s actually purple has been developed by British scientists to fight against cancer.

Developed by the John Innes Centre in Norwich, the fruit is a genetically modified purple tomato, tasting and smelling just like normal red tomato. The fruit was developed by using genes from the snapdragon flower. The fruit when ripened gets its purple colour from a pigment called anthocyanin which is rich in an antioxidant and accumulates in the peel and flesh of the tomato. Anthocyanin is believed to have anti-cancer properties besides protecting against diseases like heart problems and diabetes.

“Most people do not eat five portions of fruits and vegetables a day, but they can get more benefit from those they do eat if common fruit and vegetable can be developed that are higher in bioactive compounds,” commented Lead author of the research, Professor Cathie Martin.

The author further added, “This is one of the first examples of metabolic engineering that offers the potential to promote health through diet by reducing the impact of chronic disease. And certainly the first example of a GMO (genetically modified organism) with a trait that really offers a potential benefit for all consumers.”

Equipped with two genes from the snapdragon flower, the team of scientists incorporated these genes in a tomato fruit. Next these tomatoes were administered to mice that were bred to have cancer. The researchers observed that in comparison to mice who were given normal red tomatoes, the ones who had their diet supplemented with purple tomatoes had a longer lifespan.

Experts reveal that anthocyanins are particularly found in high levels in berries like blackberry, cranberry and chokeberry. This pigment has previously been shown to benefit those with colon cancer, cardiovascular disease and age-related degenerative diseases. In addition the pigment has also been proved to possess certain anti-inflammatory properties that help boost eyesight and also weight loss.

Researchers are now looking forward to test these tomatoes on humans. They are also looking into ways that can help elevate the levels of other compounds in common fruits and vegetables to benefit our health.

The study is published in Nature Biotechnology.