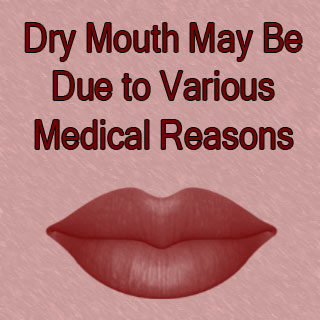 A nationwide member survey by the Academy of General Dentistry (AGD) has notably estimated that around 91% dentists note that patients taking numerous medications often complain about dry mouth. Usually the patients on multiple medications were believed to complain about dry mouth. Xerostomia or more commonly known as dry mouth is believed to be a condition which results due to a decrease in the salivary function.

Dry mouth approximately affects 1 out of 4 Americans; thereby making around 25% of the population allegedly vulnerable to tooth decay. A few commonly faced symptoms of dry mouth include problems faced while speaking, eating, swallowing, constant thirst, dentin hypersensitivity, irritation of the tongue, foamy or stringy saliva, etc. among others. Over a period of time, due to the lack of saliva, this may further aggravate and result in tooth loss, tooth decay or gingivitis.

Cindy Kleiman, RDH, BS, says that, “The number of xerostomia cases has increased greatly over time because people are taking more and more medications. General dentists are seeing this trend in their offices, which is why they are trying to learn all they can about this condition. The more they know, the better they will be at diagnosing and treating patients.”

Raymond K. Martin, DDS, MAGD believes that there may be more than 400 drugs (prescription and non-prescription) which could possibly have some sort of connection with xerostomia.

“Anti-depressants, painkillers, diuretics, antihistamines, tranquilizers and anti-hypersensitives can all contribute to dry mouth. People who take several of these medications are more susceptible,” explains Martin.

More so, it is also suggested that xerostomia could be the side effect of certain diseases or medical conditions, namely, anemia, rheumatoid, cystic fibrosis, HIV/AIDS, diabetes, dehydration, smoking, specific cancer treatments, etc.

“It’s not always easy to diagnose xerostomia because of the subjective nature of the condition,” says Gigi Meinecke, DMD, FAGD. “That is why it’s so important for patients to discuss symptoms with their dentist, even if they do not experience them on the day of the office visit.”

In order to improve this condition, patients could possibly follow a few pointers which have been suggested by AGD. They include drinking adequate amounts of water; brushing and flossing twice everyday; avoiding caffeine, alcohol and smoking; making the use of over-the-counter saliva substitutes; regularly keeping lips moisturized; avoiding the consumption of very salty foodstuffs, dry foodstuffs and citrus juices. Lastly, regular visits to the dentist have also been recommended.

An insight is to be provided on dry mouth through a course, “Understanding the Oral-Systemic Connection: From Intensive Care to Long-term Care,” during AGD’s 57th Annual Meeting & Exhibits in Baltimore, July 8-12.