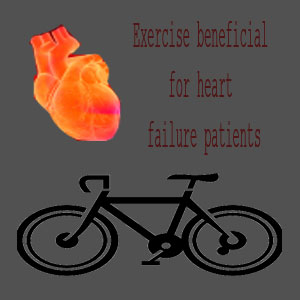 According to some researchers, exercise regimes are beneficial to heart failure patients, inclusive of those who are receiving the finest medical care. This clinical trial was presented to the American Heart Association’s Scientific Sessions 2008.

Christopher M. O’Connor, M.D., principal investigator and director of the Heart Center and professor of medicine at Duke University Medical Center in Durham, N.C., says that The Heart Failure and A Controlled Trial Investigation Outcomes of Exercise Training (HF-ACTION) is believed to be the world’s largest study which focuses on exercise regimes as against the caring for heart failure patients. This trial was funded by the US government.

The researchers followed more than 2000 heart failure patients for an average of 2.5 years. The patients were randomly allotted to special exercise training session groups where one group was taught ways to increase their workout intensity and also maximize the duration of their workouts; and the other group was given the usual care treatment, where no specific goals were kept but exercising was encouraged.

The first group of heart failure patients received a multi-staged guided exercise program.
They were given 36 training sessions supervised by experts. Their aim was to indulge in 30 minutes of exercise three times a week. Half way through the exercise program, the patients were given treadmills or exercise bicycles to exercise at their respectful homes. They were also taught how to monitor their own heart rate during exercises. Their aim was to successfully complete five weekly 40 minute sessions with the same intensity. Researchers noted no specific risk for arrhythmia, angina heart attack or fractures in the first group of heart failure patients.

Patients in the second group as per the American College of Cardiology/American Heart Association were recommended to exercise for as many days of the week as they can, for 30 minutes each. They were asked to follow medium intensity workouts.

David Whellan, M.D., M.H.S., co-principal investigator and associate professor of medicine (cardiology) at Thomas Jefferson Medical College in Philadelphia, Penn said that after following this exercise regime for 3 months, 53% of the heart failure patients were exercising for 40 minutes for three days of the week. This percentage slowly dropped slightly after a year. Whellan says, “If you think about their degree of illness, the level of training by these patients was impressive.”

A huge number of heart failure patients received the finest medical care. Many of them also had implantable cadioverter defibrillators (ICDs), according to Dr. Whellan. He further says, “Thus, the findings from the study need to be interpreted with the understanding that the improvement in outcomes were obtained while the patients were receiving exceptionally high quality of care.”

Initially, no difference was noticed in the hospitalization and death rates in these two groups. Over time, when a more in depth analysis was conducted, a 15% decrease in mortality and hospitalization of the heart failure patients was noticed.