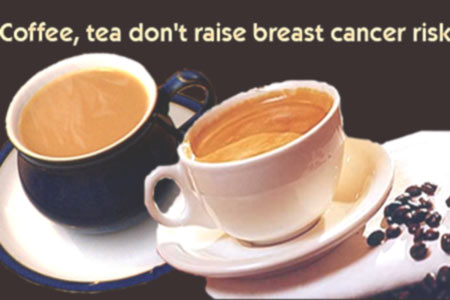 According to a new study it has been found that coffee and tea do not raise the risk of developing breast cancer.

Dr. Davaasambuu Ganmaa from Harvard School of Public Health in Boston, Massachusetts led the study, and examined coffee, tea and caffeine consumption amongst 85,987 women. These women were a part of Nurses’ Health Study and were aged between 30 and 55 years when the study began.

In the follow-up period of 22 years it was found that 5,272 women developed breast cancer.

“In this large cohort of women, with 22 years of follow-up, we observed no association between coffee (caffeinated or decaffeinated) and tea consumption and the risk of breast cancer,” Xinhua quoted Dr. Ganmaa, as saying.

“Coffee and tea are remarkably safe beverages when used in moderation,” Ganmaa added.

Women who consumed four or more cups of caffeinated or decaffeinated coffee or tea each day had no elevated risks of breast cancer as compared to those who drank less than one cup everyday, revealed the researchers.

The study didn’t show any association between the intake of other caffeinated beverages, chocolate and breast cancer.