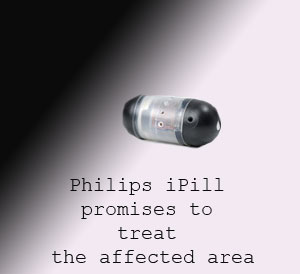 Philips’ latest invention is the “iPill”. This capsule will release the right amount of medicine needed by the body, once swallowed by the patient. Philips is one of the world’s biggest hospital equipment makers.

This capsule size iPill is soon to be presented at the American Association of Pharmaceutical Scientists (AAPS), Atlanta. Philips’ spokesperson says that the iPill can be useful for the treatment of digestive track disorders, colon cancer or bowel inflammation.

This capsule contains a microprocessor, wireless radio, battery, pump and a drug reservoir to release medicine as per the body requirement. The iPill capsule measures acidity with a sensor to verify its position in the gut and then it releases the drug. In other words, this capsule is specially designed to release the drugs at a specified spot in the gastrointestinal tract, thus sparing the entire body from unnecessary dose of the drug. iPill goes directly to the affected area, doses can be lowered, which further results in lower side-effects. This capsule can also measure local temperature and wirelessly send the data to an external receiver. The gut acidity decreases as the capsule gets further from the stomach. This in turn aids the researchers to zero-in on the affected area.

Once swallowed, the iPill sends images of the patient’s insides to an external receiver. This receiver is to be tied around the patient’s waist. This capsule is said to be able to capture more than 55,000 pictures on its journey to the digestive system during a period of 8 hours.

Similar devices with miniature cameras are already in use to aid in treatments. But unlike them the iPill has the capability to release medicine in the affected area.

The iPill is just a prototype but it can be used for serial manufacturing. It is stated that the iPill may debut at a cost of $1,000 per pill. But if a lot of people are to use it everyday then it is believed that the price may reduce to $10. It is hoped that this iPill can aid in early detection of certain illnesses.