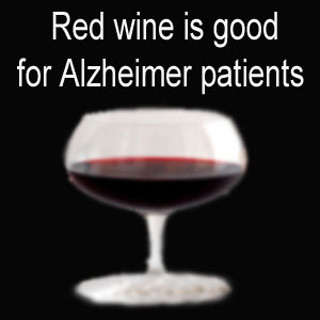 Another reason to toast with a glassful of red wine is here. According to a latest research, red wine reduces the chances of developing Alzheimer’s disease.

The French society, in spite of consuming food mostly high in cholesterol and saturated fat, has the lowest death rate from cardiovascular diseases. The scientists call this the “French paradox”. It is believed that it is red wine which is consumed with the fatty food that proves beneficial to the French, not only for cardiovascular related diseases but also in tumors and Alzheimer’s disease.

The researchers at UCLA along with the help of Mt. Sinai School of Medicine, New York researchers have revealed that red wine really helps in warding off Alzheimer’s disease. David Teplow, a professor of neurology at UCLA, along with his colleagues, proves that polyphenols, the naturally occurring compounds in red wine, blocks the formation of proteins, which are responsible for the formation of toxic plaques. These plaques are believed to destroy brain cells. The polyphenols reduce the toxicity of the already existing plaques and thus reduce cognitive deterioration. Prior to this, the working of polyphenols were not decoded.

Polyphenols consist of more than 8,000 members. They are mainly found in high concentrations in nuts, tea, berries, wine and cocoa among others. Earlier researchers have stated that these polyphenols curb the growth of toxic fibres, which consist of mainly two proteins – Aß40 and Aß42. These proteins deposit themselves in the brain and form plaques, which is the known cause of Alzheimer’s disease.

The effect of amyloid beta (Aß) on the development of Alzheimer’s disease has been studied by Teplow’s lab. He says, “What we found is pretty straightforward. If the Aß proteins can’t assemble, toxic aggregates can’t form, and thus there is no toxicity. Our work in the laboratory, and Mt. Sinai’s Dr. Giulio Pasinetti’s work in mice, suggest that administration of the compound to Alzheimer’s patients might block the development of these toxic aggregates, prevent disease development and also ameliorate existing disease.”

Here the process of Aß40 and Aß42 proteins was noticed. They kept an eye on the way these proteins folded up and held on to each other to formulate aggregates that in turn killed nerve cells in mice. These proteins were then treated with a polyphenol compound, extracted from grape seeds. They realized that these polyphenol compounds blocked the formation of the toxic aggregates of Aß. And when combined with Aß, before it was added to the brain, they decreased toxicity.

Teplow says that right now there are no treatments available that will modify Alzheimer’s disease. The results of earlier drugs for the disease didn’t prove to be successful either. They hope to soon be able to rectify this problem.

This study was published in the Journal of Biological Chemistry issue.