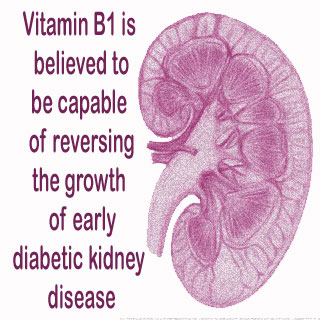 According to a latest research by the University of Warwick, high dosage of thiamine, vitamin B1, can invert the development of early diabetic kidney disease.

Type 2 diabetic patients are prone to kidney diseases or diabetic nephropathy. Early development of kidney disease is detected by the high excretion rate of albumin protein from the body in the urine, known as microalbuminuria.

The researchers have revealed that high dosage thiamine can significantly reduce the excretion of albumin and hence reverse the early development of kidney disease in type 2 diabetic patients.

The researchers conducted a test on around 40 patients aged between 35 and 65 years. Some were given 3X100 mg tablets of thiamine a day for three months, while some were given placebos. The thiamine receiving patient’s supposedly noticed a reduced rate of albumin excretion. A 41 percent decrease in albumin excretion rate was noticed. Also 35 percent of the treated patients, suffering from microalbuminuria, returned to their normal urinary albumin excretion.

Lead researchers, Dr. Naila Rabbani and Professor Paul J. Thornalley, of the Warwick Medical School, are supposedly planning out a foundation at the University of Warwick, in order to gain additional knowledge in thiamine deficiency. Dr. Rabbani further says that this particular study stresses the importance of Vitamin B1. Awareness of these kinds needs to be undertaken on a large scale.

The researchers have supposedly proven that, type 2 diabetes patients suffer from thiamine deficiency. An earlier study conducted by Professor Paul Thornalley, and his team, reveals that thiamine deficiency could possibly be the main culprit for a variety of vascular problems in diabetic patients.

Dr. Rabbani and Professor Thornalley were assisted by the researchers at the University of Punjab and Sheik Zaid Hospital, Lahore, Pakistan.

Their findings are published online in the Diabetologia journal.