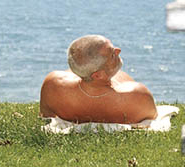 A recent research has shown that too much heat can decrease sperm count, and retard the surviving sperm. Researchers at the Bourn Hall Clinic in Cambridgeshire have suggested that soaking up the sun in tight trunks may not be the best preparation for fathering a child.

Many couples believe that a foreign break develops their probability of conceiving by allowing them to loosen up fully.

However, sperm takes eight weeks to fully grow in the testes, and during that period, is susceptible to any changes in temperature.

The testes physically hang outside the body to keep them cool, and locking them up in tight underwear, or dipping them in the hot tub may not be a good idea, researchers say.

‘We find that at an initial consultation men may have a normal sperm count, but in some cases this has declined when we check again before treatment, which may be several months later. It is only recently that it has occurred to us that there may be a seasonal effect at work,’ Dr Thomas Mathews, the Medical Director at Bourn Hall said.

He said experiments had found that exposing the testes to heat over long periods resulted in a decreased sperm count.

However, other experts shed uncertainty on the claims, although they said it may be wise to be cautious.

‘If this was a major effect, I think we would see people having problems conceiving in every country in the Tropics. However, it’s worth being cautious, as there is some evidence that scrotal heating can have an effect on DNA quality in sperm,” Sheffield University fertility expert Dr Allan Pacey said.