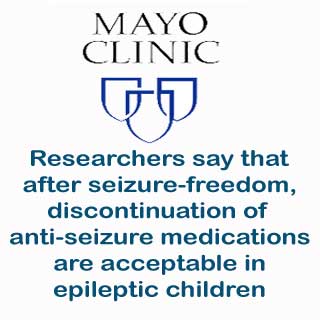 According to a latest Mayo Clinic study, anti-seizure medications in epileptic children can be discontinued after they have been seizure-cured while on medication. It’s believed that the chances of these children developing intractable epilepsy is considerably low.

Epilepsy is a disorder where a number of seizures take place. It’s estimated that around 3 million Americans suffer from this disorder. Around 10 percent of the affected children are believed to suffer from intractable epilepsy. The condition where medications solely don’t curb seizures is called the intractable epilepsy. This has an adverse disabling effect on the patient’s quality of life.

Katherine Nickels, M.D., pediatric neurologist, Mayo Clinic, and the author of the study, says, “It is often recommended that children with epilepsy who become seizure-free on anti-seizure medications be withdrawn from the drugs to avoid side effects of long-term use. Those potential side effects include cognitive slowing, incoordination, weight change, behavioral decline, and liver damage. However, few previous studies had examined the risk of intractable epilepsy following withdrawal of anti-seizure medication, and the reported risks varied widely.”

Dr. Nickels and colleagues decided to ascertain the frequency of this disorder in children, who after their cure had discontinued taking anti-seizure medications. They studied the medical records of more than 200 epilepsy diagnosed children. Maximum of these children were found to be treated with anti-seizure medications, and also had been kept an eye on for at least five years.

Thus, Dr. Nickels concludes that children, who have been cured of seizures through medications, should consider discontinuing them after recovery. They are said to not be at a high risk of developing intractable epilepsy again.

Their findings were presented at the annual meeting of the American Epilepsy Society, Seattle.