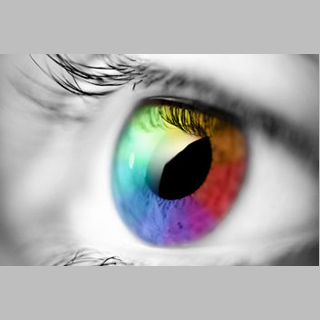 Color is usually thought of as a fundamental characteristic of an object. For instance identifying a red Corvette, a blue lake, a pink flamingo. However in spite of this popular belief, latest research from the University of Chicago suggests that our perception of color seems to be flexible and relies heavily on biological processes of the eye and brain.

It was believed that the brain’s neural mechanisms keep straight which color belongs to what object, hence one doesn’t see a blue flamingo in a pink lake even by mistake. But what happens when a color loses the object to which it is linked?

Researchers for the foremost time have shown that instead of disappearing along with the lost object, the color seems to lock onto a region of some other object in view. This research finding is noted to reveal a novel basic property of sight.

“Color is in the brain. It is constructed, just as the meanings of words are constructed. Without the neural processes of the brain, we wouldn’t be able to understand colors of objects any more than we could understand words of a language we hear but don’t know,” says Steven Shevell, a University of Chicago psychologist who specializes on color and vision.

“An aspect of human vision that we normally don’t appreciate is that different features of an object, including color and shape, can be represented in different parts of the brain,” continues Shevell, the Eliakim Hastings Moore Distinguished Service Professor in Psychology and Ophthalmology & Visual Science.

It was noted that, if a person notices a basketball coming, he will perceive it as having a specific color, shape and velocity.

“The knitting together, or what can be called ‘neural gluing,’ of all those different features so we see a unified object is a complex function done by the brain. Our research focused on how the brain does that,” elucidates Shevell.

In order to understand how the brain represents the color of objects, the researchers were believed to have used a technique called binocular rivalry. The technique seems to present a different image to each eye and thus counters signals from the right eye against signals from the left.

He further stated that, “The brain has difficulty integrating the two eyes’ incompatible signals. When the signals from the two eyes are different enough, the brain resolves the conflicting information by suppressing the information from one of the eyes. We exploited this feature of the brain with a method that caused the shape from one eye to be suppressed but not its color.”

“The brain cannot fuse them in a way that makes sense. So the brain sees only horizontal or vertical,” continues Shevell.

For the purpose of their research, they developed a novel form of the technique which allowed the horizontal pattern to be suppressed without removing its red color. Apparently, the red color was continuing on to the brain.

Researchers found that at this point, the brain seems to have a musical chairs problem. Both the red and green colors were believed to have reached consciousness, but with only the one vertical pattern i.e. one object but two colors.

Shevell claimed that, “Disembodied red, which originated from the unseen horizontal pattern in one eye glued itself to parts of the consciously seen vertical pattern from the other eye. That proves the idea of neural binding or neural gluing, where the color is connected to the object in an active neural process.”

“To us it seems automatic. Every basketball has a color. Every shirt has a color, but the brain must link each object’s color to its shape,” adds Shevell.

The findings of the research reveal that the brain seems to process the shape of an object and its color in two separate pathways. However, it was observed that the object’s shape and color normally appear to be linked. The neural representation of the color could possibly survive alone. When that happens, the brain is believed to have established a latest link which binds the color to another visible shape.

The findings of the research have been published in the latest issue of Psychological Science.