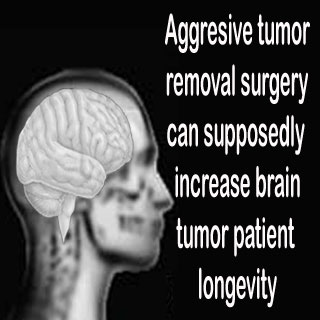 A new Mayo Clinic study says that a low-grade glioma patient’s survival rate gets higher if they undergo an aggressive tumor removal surgery. It is also stated that if the entire tumor cannot be removed then radiation therapy should immediately precede surgery. This will supposedly increase the longevity of the cancer patient.

It’s estimated that every year around 17,000 Americans are diagnosed with gliomas. The glioma tumor forms in the brain or spinal cord tissue. They are believed to replicate within the nervous system. It’s estimated that the survival of a glioma patient is around five to seven years.

Lead author, Nadia Laack, M.D., a Mayo Clinic radiation oncologist, and other researchers reflected on the medical records of more than 300 patients, suffering from low-grade gliomas, and also had a 13 year follow up on an average. It’s stated that almost 50 percent of the patient’s who underwent aggressive surgery; 15 years later were free of the deadly tumor.

Dr. Laack says, “This study is exciting because it shows how well glioma patients can do after surgery. An average of 15 years tumor-free is better than any previously published results. It is also exciting to discover that patients can benefit from radiation therapy. It not only lengthens the time before the tumor comes back, it actually improves the length of time people live. This builds on previous Mayo Clinic data that suggested similar results from a small study published nearly 20 years ago.”

Dr. Laack assumes that this study may prove to be controversial because of the standard concern regarding the probable long term side-effects of radiation therapy. However she reassures that the Mayo Clinic can, presumably, reduce the side effects by only concentrating the radiation therapy on the tumor.

Their findings are published online in Neuro-Oncology.