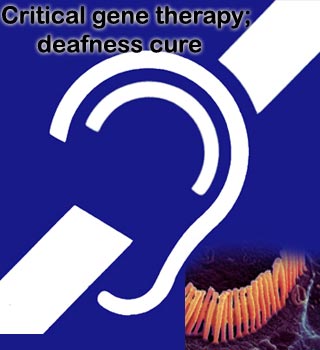 Scientists around the globe are constantly in search of new treatments for deafness. For the first time doctors have been successful in growing an important gene that could harbour a cure of deafness. A recent study reveals a deafness breakthrough with the new ear hair grown that should apparently boost hearing.

The study was headed by neurobiologist John Brigande of the Oregon Health and Science University, in Portland. The scientist himself is known to be hard of hearing since the age of 10. John and his team used gene therapy on mouse embryos to grow hair cells with the potential to reduce hearing loss in adult animals. Implantation of the gene known as Atoh1 into the inner ear of a mouse influenced non-sensory cells to become hair cells.

Dr. Brigande mentioned, “There is intense interest in cell replacement strategies to ameliorate the effects of inner ear disease, but until now we didn’t have direct evidence indicating we could make a functional sensory hair cell.”

The experiment by the American scientists has found that the innovative gene therapy is capable of generating the type of cells that are missing or damaged in deaf animals. They further discovered that injecting the mice with this key developmental gene led to the production of ear cells that convey sounds to the brain.

The auditory portion of the inner ear known as cochlea has sensory hair cells that are known to convert sound waves into electrical impulses which are carried to the brain. Hearing impairment also called as nerve deafness is primarily caused by the loss of these cells. There are about 30,000 hair cells in the human ear at birth which can be damaged by factors like infections, aging, genetic diseases, loud noise or treatment with certain drugs. Commonly these damaged hair cells do not regrow in adult humans.

However many studies have brought to light similar results. Hope that nerve deafness may be curable is rekindled by these recent researches.

This study is the first of its type to show that the cells generated by gene therapy are functional. In combination with research into embryonic stem cells and reprogrammed adult cells, the novel gene therapy technique might help in the production of extra, working hair cells in a mouse embryo. This could be an eminent step towards similar therapies in humans.