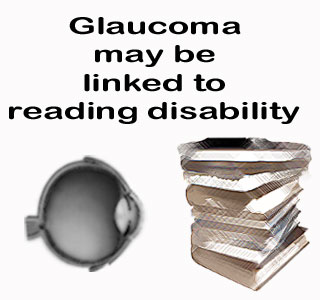 A latest study may have revealed a link between reading impairment and glaucoma in elderly adults. They may have probably associated slower reading ability in the elderly with glaucoma.

Glaucoma is a common eye condition, which can even lead to blindness. It’s estimated that around 2 percent of adults older than 40 years of age get affected with this disease in the U.S., and around 10 percent suffer the risk of potential glaucoma. In order to treat the disease before it leads to disability, a better understanding of the condition is required.

This study was conducted by Pradeep Y. Ramulu, MD, PhD, Wilmer Eye Institue, Johns Hopkins University, Baltimore, and his colleagues. They tested more than 1000 subjects with the aim of verifying the link between glaucoma and spoken and reading speed. The subjects were judged on their reading speed, by reading a non-scrolling text aloud. The ones whose word reading limit didn’t increase more than 90 words per minute were believed to be impaired. On the other hand, the subjects also had to undergo various tests that evaluated their optic nerve images, visual fields, and medical records.

The results revealed that about 95 percent of the subject’s did not suffer from glaucoma, while the rest either had unilateral (one eye) glaucoma or bilateral (both the eyes) glaucoma. The author’s say that, “Subjects with unilateral glaucoma showed similar reading speeds and odds of reading impairment when compared with subjects without glaucoma. Subjects with bilateral glaucoma read 29 words per minute slower than those without glaucoma and had roughly twice the odds of reading impairment.”

The authors also believe that education and race played a major role in the reading speed of the subjects. They conclude that a more detailed analysis needs to be conducted in order to verify and determine their study results.

This study was funded by grants from the National Institutes of Health.

Their study findings are published in the Archives of Opthalmology, which is one of JAMA/Archives journals.