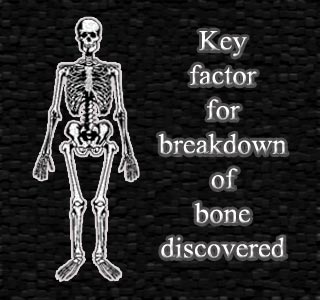 According to a latest study, a chemical mediator in the blood plays a key role in balancing the build-up and break down of the bones in the body. This mediator, which also plays a role in the immune cell migration, may aid scientists in developing various new preventions and therapies against bone-degenerating diseases. This study was conducted by the National Institute of Allergy and Infectious Diseases, which is a part of the National Institutes of Health.

Bone is a tissue which consistently goes through growth and degradation. The osteoclasts, specialized cells, cause bone degradation or bone resorption. Usually bone degradation gets balanced with the act of the bone-forming cells, called osteoblasts. It is estimated that the bone weakening effects of osteoporosis can be credited for about 1.5 million fractures in the U.S.

Anthony S. Fauci, MD, Director of the National Institute of Allergy and Infectious Diseases, says that, “Most current therapies for bone-degrading diseases target mature osteoclasts. Understanding how immature osteoclasts are recruited to the bone in the first place and targeting the signals that control that migration represents a potential new approach to treating and preventing debilitating joint and bone diseases.”

Masaru Ishii, MD, PhD, a visiting fellow from Osaka University, Japan, had earlier discovered that the chemoattractant sphingosine-1-phosphate or S1P had the ability to mobilize immature osteoclasts, along with its primary function of trafficking immune cells into and out of the lymph nodes. “Because immature osteoclasts come from the same parent stem cell that gives rise to specific white blood cells already shown to respond to S1P,” Dr. Ishii says, “it seemed plausible that S1P could play a role in osteoclast migration.”

The study investigators conducted tests on live mice in order to verify their findings. Their results, in unison with the earlier data, hint that the use of combined therapies aimed at immature osteoclast migration and mature osteoclast function, could be useful in treating and preventing bone-degradation relates diseases.

Ishii’s report describing the project is present online in Nature.