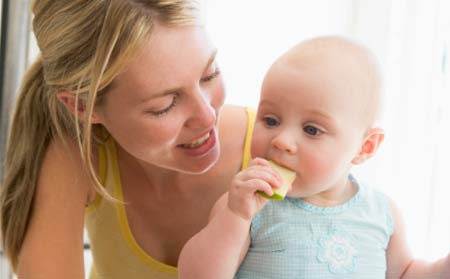 Food consumed during early infancy could be responsible for shaping taste preferences in adulthood. A study conducted by experts at the University of Nottingham has put forth that babies who are weaned by means of solid finger food may develop healthy food preferences and be less obese, than their spoon-fed counterparts.

The trial involved 155 children and their mothers who were surveyed regarding food habits of the kids. Taste preferences of the participants in terms of dairy, carbohydrates and proteins were also gauged. According to the findings, children who experienced baby-led weaning seemingly had a liking for carbohydrates more than spoon-fed infants. On the other hand, the latter appeared to have a preference for sweet foods.

Co-author of the study, Associate Professor in the School of Psychology,Dr Ellen Townsend, shared, “Although numerous studies have focused on when to introduce solid foods into an infant’s diet there is a dearth of evidence concerning the impact of different weaning methods on food preferences and health prospects. We believe our report is the first piece of research to examine whether weaning method can influence food preferences and the future health of the child.”

Baby led weaning style also apparently promoted nutritious dietary choices as carbohydrates are considered to be healthy. This is a crucial result as sweets and frequency of exposure are cited to be the most influential factors for initial food preferences, the team believed.

Importantly, infants who were weaned by using the baby-led method supposedly controlled their food consumption in a way, which resulted in lower BMI of the kids. This study may be an important step towards combating obesity in the society, the team concluded.

The article is published in the journal, BMJ Open.