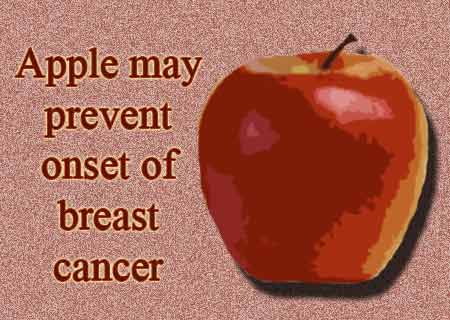 A latest study highlights the benefits of apple extract against a dreadful disease like breast cancer. Fresh apple extracts were found to be very helpful in reducing the size of these potentially fatal tumors in rats. This study was conducted by the researchers of the University of Cornell, Ithaca.

It is said that breast cancer is the second leading cause of cancer death, and also the most frequently diagnosed form of cancer in U.S. women. Over the past year, these researchers have conducted about six studies where rats were exposed to a type of adenocarcinoma, a leading cause of breast cancer. These studies were published by Rui Hai Liu, Cornell associate professor of food science and a member of Cornell’s Institute for Comparative and Environmental Toxicology.

These hairy animals were fed the human equivalent of one apple per day for a period of about 6 months. Liu along with his team discovered that apples significantly reduced the size of tumors in these rats. In fact, it was discovered that the more extracts they were fed; the more their breast tumors were reduced.

Professor Liu says that, “We not only observed that the treated animals had fewer tumors, but the tumors were smaller, less malignant and grew more slowly compared with the tumors in the untreated rats.”

The study findings are published in the Journal of Agricultural and Food Chemistry.