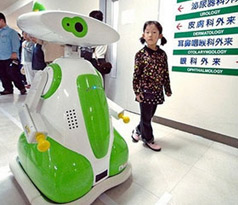 A Japanese hospital has an android as a receptionist and two android porters, who work alongside their human counterparts. The Aizu Central Hospital in Japan unveiled the robotic trio on October 28.

The receptionist robot, which has been produced by Japanese robot maker Tmsuk Co. Ltd., welcomes visitors at the entrance of the hospital and answers spoken queries as well.

The two porter robots can move around on two wheels at a maximum speed of 1.5 kilometers per hour and can carry luggage and take visitors and patients to their destinations. The robot porters move through the 900-bed hospital with the help of a laser-based motion detection system.

The 1.3 meter high white-and-green robotic porters can also alert people to obstacles with their sensors.

“We expect that the robot industry will grow into one equal to that of the car industry,” said Shiro Fujita, director/manager of the Tmsuk Robot Corporation. “Healthcare work will be an important part of that industry.”

Hospital official Naoya Narita said, “They are the nation’s first receptionist and porter robots actually working in a hospital, and people’s reactions to them are quite positive. By introducing them, we want to show the scene of a future hospital, where robots are getting along with patients and visitors,” Narita said, adding that the hospital is planning to introduce another robot next year.