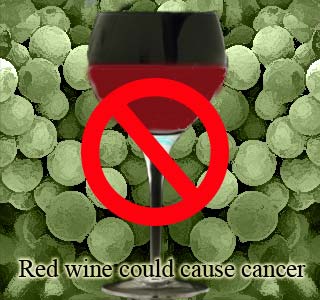 There has been innumerable data to support the claim that a daily glass of wine may prove to be beneficial for the over all well being. However, a latest study says that wine consumption in fact may increase the risk of developing cancer by about 168 percent! This study was conducted by the National Cancer Institute, France.

The study says that following tobacco, alcohol is the second most avoidable cause of death. This study also says that excessive consumption of red meat could increase the risk of developing colonic cancer, while excessive salt intake could increase the risk of developing stomach cancer. It is also stated that Britain is the 10th biggest drinking nation in the world. It is estimated that annually per person consumes about 12 liters of alcohol, which is equivalent to about three glasses of wine everyday.

The official statistics estimate that alcohol can be held responsible for about 6 percent of the annual cancer induced deaths in the U.K. The study says that consuming just about one 125 ml glass of wine may increase the likelihood of developing cancer of the mouth, throat, breast and colon-rectum. However, these findings contrast the findings of an earlier research stating that the antioxidants in red wine could actually reduce the risk of developing cancer.

Dominique Maraninchi, President of the National Cancer Institute, says that, “Small daily doses of alcohol are the most harmful. There is no amount, however small, which is good for you.”

It is also said that small measures of alcohol may to a certain extent shield an individual against coronary heart diseases, but they also state that there are many other healthier alternatives to look after one’s heart.

The study says that, “The cause is above all the transformation of ethanol in alcohol to acetaldehyde, which damages DNA in healthy cells.” They further state that this is more likely to occur if alcohol is consumed daily, even if in small measures.

The study states that there are no guaranteed diets that can promise protection against cancer; however small changes in daily diet and behavior may reduce the risk of developing cancer. They recommend the consumption of fresh fruits and vegetables, avoid alcohol and tobacco usage, and also the inclusion of exercise and increased physical activity on a daily basis.