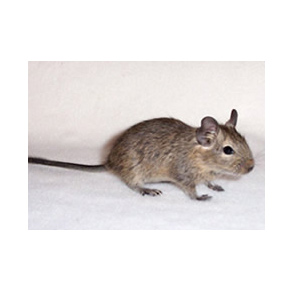 A Japanese study has found that even rodents can be trained to use tools and understand their functions. This study challenges the fact that only primates and a few species of birds are smart enough to do this.

For the study, six adult degus rodents were trained to use a tiny T-shaped rake to retrieve food at a laboratory at the Japanese government-funded RIKEN research institute. The degus, whose scientific name is Octodon degus, is originally from Chile.

The experiment lasted 60-days and in the final stage, the rodents were able to pull the food towards themselves to hold onto it and then move it to obtain food.

It is the first study in the world to demonstrate that rodents can be trained to manipulate tools in a systematic way and understand their functions.

Head of the study team Kasuo Okanoya said, “A conventional view holds that the use of tools is a high-level ability, but animals in the class of rodents can do it if they are trained accordingly.”

He said that the findings of the study suggested that a wide range of animals could use tools. He did say that it may be doubtful in the case of fish.

The study said that “socio-ecological” factors may be the most important, rather than innate physical characteristics, in whether animals can use tools.

In one test they were given two tools — a familiar functional rake and a non-functional tool that lacked a blade or had a raised blade. They chose the functional one without hesitation in most cases.

They chose the correct tool without being tricked by its color or size..

The team of researchers hope to conduct more research into what is happening in the brain at a molecular level when animals use tools. This is because it is much easier to study rodents than macaque monkeys, who are conventionally used for such research in labs.