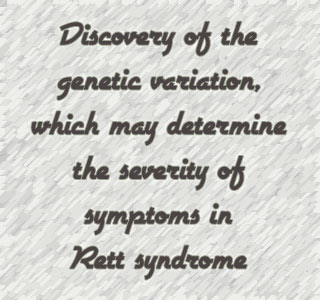 Rett syndrome is said to be a neurodevelopmental disorder, which usually affects girls. This disorder may be characterized by certain clinical features like deceleration of the rate of head growth, small hands and feet, repetitive hand movements, etc. Symptoms associated with this syndrome may include cognitive impairment and social problems among others.

It has been estimated that this relatively rare disorder may affect around one in every 8,500 female births. The detection of this disorder in early childhood may not be as simple, because its symptoms may usually be confused with other disorders like cerebral palsy, autism etc. Seemingly, at present there may be no cure for this rarely affecting disorder.

For the purpose of the study, the investigators analyzed the DNA samples and medical data of more than 100 patients. This data was said to have been withdrawn from the Australian Rett Syndrome Database and an Israeli cohort.

Head of the Australian Rett Syndrome Study, Telethon Institute for Child Health Research, Dr. Helen Leonard, says that, “We know that there is a wide range in the onset and severity of symptoms in patients with Rett syndrome but it has been difficult to give families a firm idea of how the disorder would progress,” Further continuing that, “This information is potentially helpful in predicting the clinical progression, but importantly, gives us another area to explore for potential therapies.”

The investigators have further stated that, though it was previously known that mutations in the MECP2 gene causes Rett syndrome, the newly uncovered information has provided an in-depth understanding. The recently unveiled data has ascertained an association between a brain-derived neurotrophic factor polymorphism (BDNF) and the intensity of the experienced symptoms.

Study investigator, Professor John Christodoulou, from the NSW Centre for Rett Syndrome Research, Children’s Hospital, Westmead, Sydney, noted that, “Those patients with the normal BDNF genetic variant had less severe symptoms, with later onset and frequency of seizures. We know that BDNF plays a major role in the development, survival and function of brain cells. What we now have to establish is the nature of the interaction between MECP2 and BDNF.”

They believe that by influencing the BDNF in the patients suffering from this disorder, it may be possible to hinder the occurrence of seizures in these patients. It may also be possible to lower some of the debilitating factors associated with this syndrome.

These findings have been published in Neurology.