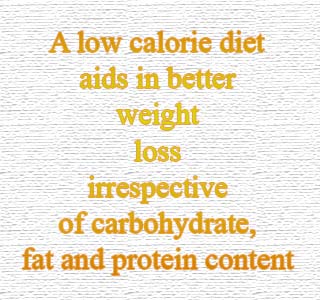 Many people who are unhappy with their present weight take up different dietary regimes with the hope of shedding their extra kilos. However there have been many speculations as to giving up of which nutrient through dieting would bring about the desired result.

Now a long term randomized clinical trial states that calorie reduction helps in weight loss regardless of fat, carbohydrate or protein content. They also say that enrolling in counseling sessions may also aid in promoting weight loss. This trial was led by the researchers at the Harvard School of Public Health and Pennington Biomedical Research Center of the Louisiana State University System.

The trial compared certain overweight subjects allocated to four different diets for a period of two years. Lead author of the clinical trial, Frank Sacks, professor of cardiovascular disease prevention at Harvard School of Public Health, says that, “This is important information for physicians, dieticians and adults, who should focus weight loss approaches on reducing calorie intake.”

More than 800 subjects were divided into four groups having different nutrient compositions. All the four diets followed the healthy norm, with a diet high in whole cereal grains, fruits and vegetables, and also by replacing saturated fat with the unsaturated one. All the subjects were asked to undergo 90 minutes of moderate exercise every week. The daily food intake was to be recorded in a food diary, and counseling sessions were also provided to these subjects once in a while.

The obtained results revealed that regardless of fat, protein or carbohydrate content a low calorie diet aided in weight loss. It was discovered that the subjects lost an average weight of 13 pounds in six months and maintained a 9 pound loss within two years. It was also discovered that those subjects who regularly attended counseling sessions lost more weight as compared to the ones who didn’t. The investigators state that any type of diet works only if a person sticks and adheres to it sincerely.

Their study findings are published in The New England Journal of Medicine.