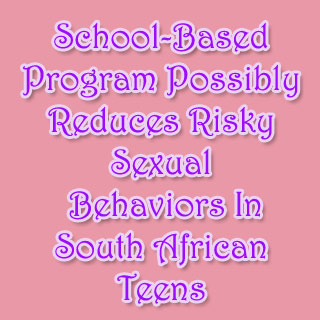 It seems that school-based programs help teens, or at least this piece of information suggests so. A recent study claims that school-based, six-session program targeting sexual risk behaviors decrease rates of unprotected sex and sex with multiple partners among South African sixth-graders. With almost 5.5 million HIV or sexually transmitted disease (STD) patients in South Africa, the analysis aims to create awareness about ways to eliminate risk of developing such ailments.

Estimates claim that more than one-half of all South African individuals aged 15 years in 2006 will not survive to 60 years of age. Hence, creating awareness about dangerous and risky sexual behaviors in youngsters may help reduce the number of HIV patients. In order to test the ability of a school-based prevention program in such an environment, experts triggered a cluster-randomized, controlled study. The analysis included 18 primary schools in Eastern Cape Providence, South Africa and two six-session behavior-change interventions based on extensive investigations.

Experts allege, “In conclusion, sexual transmission of HIV is a major risk faced by adolescents in sub-Saharan Africa, and interventions are needed urgently to reduce their risk. This study provides the first evidence that a theory-based, contextually appropriate intervention can reduce sexual risk behaviors, particularly unprotected vaginal intercourse, vaginal intercourse and multiple partners, among young South African adolescents in the earliest stages of their sexual lives. Future research with more sexually experienced adolescents will have to explore whether such interventions can have an effect on condom use and STDs, including HIV.”

John B. Jemmott III, Ph.D., of the University of Pennsylvania, Philadelphia, and colleagues randomly assigned nine schools to participate in the HIV/STD intervention. This intervention aimed to teach students ways of avoiding HIV and other STDs. It created awareness about abstinence and condom use, and increase the skills and self-confidence required for choosing less risky behaviors. The intervention focused on behaviors associated with other disorders, like heart disease, diabetes and cancer.

The study is published in the October issue of Archives of Pediatrics and Adolescent Medicine, one of the JAMA/Archives journals.