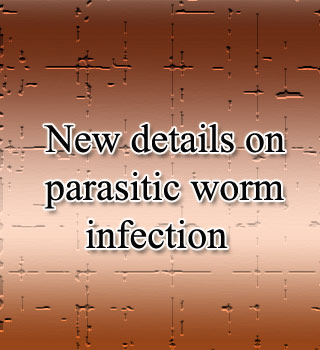 Researchers from the UT Southwestern Medical Center seem to have got a step closer in their efforts to eliminate parasitic worm infections. The novel findings reveal that a biochemical system that controls development and reproduction of Caenorhabditis elegans possesses identical functionality in a host of parasitic nematodes including hookworms. Caenorhabditis elegans is known to be a common research worm.

Statistics from the World Health Organization reveals that parasitic nematodes infect about 2 billion people across the world while it severely sickens approximately 300 million. Among these at least 50% victims are school-age children. Infectious nematode larvae reside in the soil and are found in plenty in areas having improper sanitation. With a third of the world’s population afflicted by worm infections, these new findings may speed up the efforts against worm infections.

Led by Dr. David Mangelsdorf, chairman of pharmacology at UT Southwestern and senior author of the new study in PNAS, UT Southwestern scientists had made the discovery in C elegans which is a nematode about the size of a pinhead earlier in 2006. Now as part of the new study, researchers chose to pharmacologically treat the hookworm parasites at the infective larval stage itself.

“We essentially coaxed them to mature before a food source — the host — is available,” Dr. Mangelsdorf, an investigator with the Howard Hughes Medical Institute at UT Southwestern mentioned. “What keeps these parasites infectious is the lack of production of dafachronic acid. Once they get inside the host, however, something switches them on to begin making this compound. We can interrupt the worm’s life cycle just by giving it this compound when it’s in the infectious state, before it enters a host.”

According to the research, the necessary signals that mature the worms are sent by an activating molecule called as dafachronic acid. This allows the worms to progress from a stage where they infect a host to a stage where they feed on the host, consequently making the host sick. With dafachronic acid, the parasites passed into the ‘feeding’ larval stage outside a host. Here they had no food supply and died. Researchers found similar effects during the treatment of other infectious species.

Though the nature of the switch is still unclear, researchers are assuming that the parasite itself could sense it is inside the host. Following which Mangelsdorf remarked it starts forming the compound and it is also quite likely to receive a signal from the host to begin production. He adds that it’s also possible that the parasite receives the dafachronic acid or its precursor building blocks from the host.

The study puts forth many additional details that reflects the nature of various forms of dafachronic acid along with their functions in particular nematodes. Researchers reveal that irrespective of the source of dafachronic acid, the compound has potential as a possible therapeutic target. Screening large libraries of chemicals that find compounds which have behavioral patterns similar to dafachronic acid is the next step of the study. Researchers are hoping to develop these compounds into pesticides that could be spread in high-infection areas.