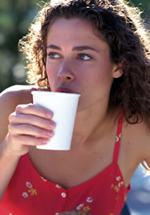 A new study has revealed that reducing body temperature, even without cutting down calories, can extend lifespan.

Prior to this study, researchers had known that core body temperature and aging were related in cold-blooded animals. Scientists had also known that lifespan could be extended in warm-blooded animals by reducing the number of calories they consumed, which also lowered core body temperature. But the degree of calorie restriction needed to extend lifespan is not easy to achieve, even in mice.

“Our study shows it is possible to increase lifespan in mice by modest but prolonged lowering of core body temperature. This longer lifespan was attained independent of calorie restriction,” said Bruno Conti, an associate professor at Scripps Research who led the study.

The scientists were able to measure the effect of lowered core body temperature on lifespan, finding that the mice with lowered core body temperature had significantly longer median lifespan than those that didn’t. While this effect was observed in both males and females, in this study the change was more pronounced in females-median lifespan was extended about 20 percent in females and about 12 percent in males.

“Our model addresses something more basic than the amount of food,” said Tamas Bartfai, who is chair of the Molecular and Integrative Neurosciences Department, director of the Harold L. Dorris Neurological Research Centre at Scripps Research, and an author of the paper. “It works at the level of the thermoregulatory set point that is governed by intra-brain temperature and neurotransmitters. This mechanism, we believe, will be a good target for pharmacological manipulation or heating.”

The researchers are now working to identify the precise mechanisms that are responsible for the beneficial effects of reduced core body temperature. They are also investigating whether their findings can be applied to research on obesity.