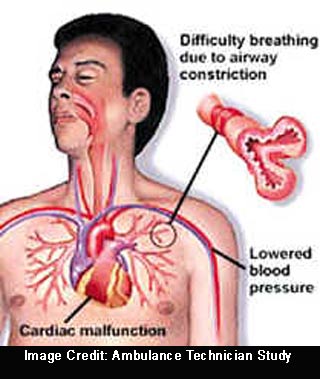 Experts were believed to have found a method for reducing the impact or symptoms of anaphylactic shock. This study was led by Dr Alirio Melendez and Prof Eddy Liew based at the University of Glasgow’s Biomedical Research Centre.

Scientists from Glasgow have identified a molecule which seems to increase the allergic reaction. In addition, they have successfully developed a biological agent in order to reduce the symptoms. This molecule was believed to cause a huge reduction in the number of critical cases of anaphylactic shock across the world.

Anaphylaxis is known to be a severe allergic reaction. Apparently, its symptoms include difficulty in breathing, generalized flushing and could even result in heart attack and death. It was noted that common causes of anaphylaxis include foods such as peanuts, tree nuts, sesame, fish, shellfish, dairy products and eggs. Whereas non-food causes include wasp or bee stings, natural latex or rubber, penicillin or any other treatment or injection.

Dr Melendez said that, “We looked at a number of patients who had experienced anaphylaxis during surgery and found that they had very high levels of the molecule IL-33. IL-33 is a relatively new discovery and its part in anaphylaxis (or any pathology) has not been greatly understood.”

Dr Melendez claimed that IL-33 plays an essential role in immensely increasing the inflammation which was experienced during a period of anaphylactic shock. This led them to find out ways to decrease its impact. It was observed that an anaphylactic shock quickly causes a huge inflammatory reaction which is frequently so severe that it restricts breathing.

Dr Melendez was of the opinion that the severity of the shock seemed to be connected to the IL-33 molecule, which appears to act as an amplifier to the inflammatory reaction. Evidently, this could lead to a critical constriction of the airway and may ultimately lead to death.

He further says that, “Our study suggests that patients with the most severe anaphylactic reactions have very high levels of IL33 in their system. In basic terms, without the IL33 molecule, the allergic reaction experienced would be far less severe, greatly reducing the risk of death.”

For the purpose of the study, they effectively utilized a mouse model in order to demonstrate that blocking the IL-33 molecule may perhaps reduce the severity of the attack.

“Our current strategy is to utilize the soluble receptor for IL-33 (sST2) to validate as a potential biological agent that can potentially be used to target IL-33 during an anaphylactic shock. At the same time, we are looking at the intracellular signaling mechanisms by which IL-33 stimulates cellular responses in order to identify potential novel target,” elucidates Dr Melendez.

According to Dr Melendez, the study findings are crucial as it could assist them in developing better treatments for this serious condition. Also, experts are trying out possibilities to create a suitable therapeutic to treat anaphylaxis.

“We are now further studying the role of IL-33 in anaphylaxis and similar disorders, and our plans are to further these studies on food, venoms and drugs-mediated anaphylaxis,” claims Dr Melendez.
Lynne Regent, Chief Executive of The Anaphylaxis Campaign, said that, “The results of the study, led by Dr Melendez and Prof. Liew at The University of Glasgow, are encouraging. We would hope to see this work developed further to a point where it could be of real benefit to people living with Anaphylaxis or at risk of severe allergic reaction.”

He further stated that, the Anaphylaxis Campaign appears to be completely supportive to this trustworthy study. However, he says that it would be remarkable when these findings could be conveyed to the allergic population with the assistance of adequate allergy services. The team found that the novel cytokine which is an immune hormone – IL-33 seems to play a significant role in the development of anaphylaxis.

The findings have been published in the journal, Proceedings of the National Association of Sciences of the USA (PNAS).

Novel technique may be able to trace the development of Parkinson...