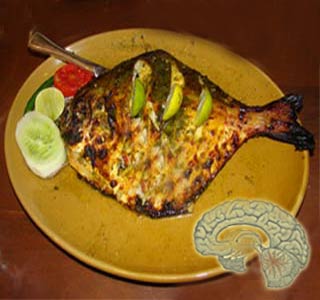 Adequate consumption of fish is long known to have certain health benefits. This protein food is stated to be rich in omega 3 long-chain polyunsaturated fatty acids that are believed to be heart friendly. Now, a newly conducted study has stated that the consumption of oily fish may also prove to be beneficial to the cognitive function in later life. Oily fish consumption could possibly prevent the development of dementia.

It has been estimated that globally more than 24 million people may be suffering from dementia; where, many of these patients are believed to belong to countries having either low or middle income.

Apparently, in recent times, great interest has been developed in determining if dietary factors may have a role to play in the onset and severity of dementia. Especially, the role of oily fish and meat were believed to be assessed for their role in the development of dementia.

Notably, some studies have suggested that the omega-3 fatty acids present in oily fish may be positively related to cognitive function later in life. On the other hand, some studies have even suggested that greater meat consumption may be associated to cognitive decline. Thus, in order to assess these claims an international group of experts were noted to have studied older people in around 7 low-income countries.

For this purpose, the data of almost 15,000 subjects in these countries were assessed. The dietary habits of these subjects were believed to have been evaluated through standard, culturally appropriate face-to-face interviews. On the other hand dementia was evidently diagnosed through validated culturally and educationally-fair criteria.

It was observed that in each of the assessed countries, except India, there seemed to be a link between the occurrence of dementia and the consumption of fish. The experts suggest that this apparent link may not be due to the poor overall nutritional status of the people suffering from dementia; because these people seemed to have a higher meat intake.

These observations have been published in the American Journal of Clinical Nutrition.