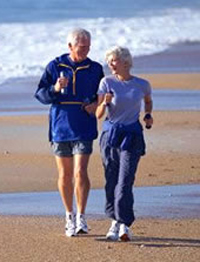 Calories are the amount of energy in the food and drink we consume. If all calories consumed aren’t used as energy, they may be stored as fat. Carbohydrate, protein, and fat are the primary sources of calories in the diet. Alcohol also provides calories.

Scientists at the University at Buffalo conducted a study with male rats in three age groups — 18, 24 and 29 months, comparable to ages 50-70 years in humans — that had been fed either a normal or 40 percent calorie-restricted diet from birth.

They put the animals through tests to determine their grip strength, muscle tone, stamina and swimming speed.

The results showed that animals on the restricted calorie diet had significantly higher physical performance scores than animals that were fed a normal diet. They also had less fat and a lower fat-to-lean ratio, according to a report posted on the university website.

The study has suggested that severely restricting calories in day-to-day diet may also help humans in maintaining physical fitness into an advanced age, slowing the seemingly inevitable progression to physical disability.

But ‘it’s very difficult for people to maintain that type of diet for short periods of time, and it would be nearly impossible over a lifetime, while staying healthy. Starting on a diet like that in the senior years would be harmful’, he said.

He added that a more moderate form of caloric restriction, about eight percent, is achievable in humans and may have positive effects on specific oxidative stress that causes wrinkles, sagging skin, and age spots.